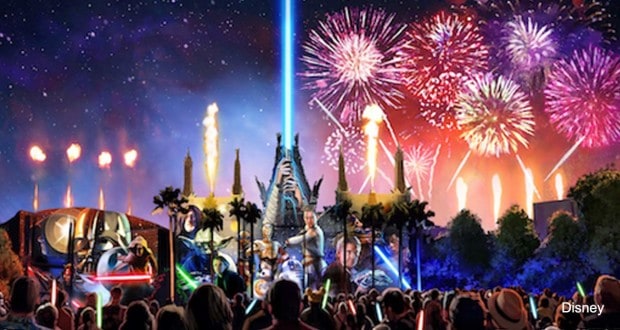 “As rumored, a new Star Wars fireworks show is on its way to Disney’s Hollywood Studios, but so are some other new entertainment offerings.

The Force will officially awaken at the park April 4, with the debut of the brand new Star Wars stage show, “Star Wars: A Galaxy Far, Far Away.” The new show will play out iconic moments from the film saga on Center Stage (in front of the Chinese Theater), and will feature appearances from Star Wars characters like Kylo Ren, Chewbacca, Darth Vader and Darth Maul.

And starting this summer, there will be a new Star Wars fireworks show, “Star Wars: A Galactic Spectacular.” This new nightly show is the next generation of the current Star Wars-inspired fireworks show. The show will combine fireworks, pyrotechnics, special effects and video projections that will turn the nearby Chinese Theater and other buildings into the twin suns of Tatooine, a field of battle droids, the trench of the Death Star, Starkiller Base and other Star Wars destinations. The show will be punctuated with a tower of fire and spotlight beams, creating massive lightsabers in the sky. This new show will reportedly be the most elaborate fireworks display to take place in the history of Disney’s Hollywood Studios.”

Are You A Big Star Wars Fan? Consider planning and booking your next Disney trip to Hollywood Studios with an Authorized Disney Vacation Planner you can trust like MickeyTravels. They’ll help you get the best Walt Disney World deal, share expert advice and their services are totally FREE! It’s genius!