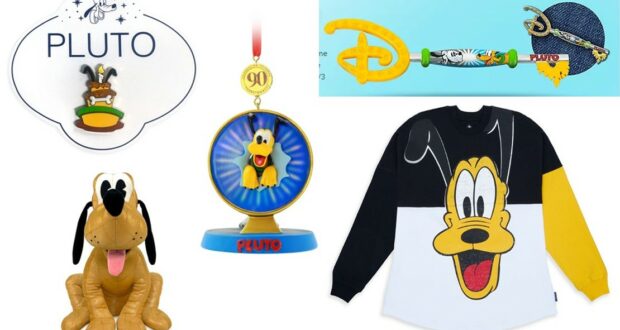 Disney is celebrating Pluto’s 90th Anniversary with special merchandise on shopDisney! While most merchandise is available now, there is one item that will be coming to shopDisney’s “MerchPass” soon. Check out all the details and merchandise below of Mickey’s favorite pup pal, Pluto!

For Pluto’s 90th Anniversary, there is one ‘MerchPass” item to be aware of! The MerchPass is an early access drawings that can reserve your opportunity to buy a high-demand item. Enter soon for your chance to purchase our Pluto 90th Anniversary Key & Key Pin. Entries open Thursday 9/3 starting at 7AM PT.

Pluto 90th Anniversary Spirit Jersey for Adults for $64.99. “Look fetching while celebrating the 90th anniversary of Mickey’s pup Pluto in this all-cotton Spirit Jersey. The color-block construction, full front screen art, and puff ink lettering on the back create a pawsome look worth barking about.”

Pluto 90th Anniversary Cake Pin for $12.99. “Celebrate the 90th Anniversary of Mickey’s cute canine companion with this sweet pin inspired by Pluto! The glittering cake comes with a Mickey icon pinback on a card made to look like Pluto’s name tag.”

There are also 6 other Pluto 90th Anniversary Pins each Limited Edition for $17.99 per pin. For more details on those 6 other pins, visit shopDisney here.