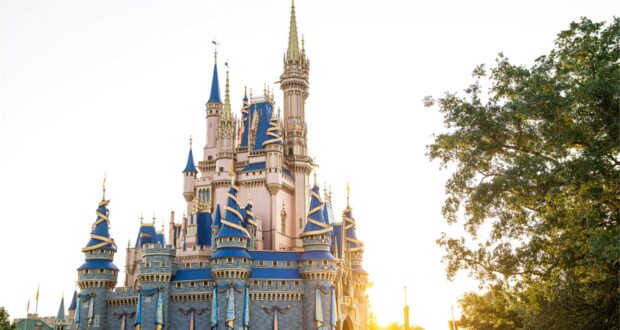 Walt Disney World is gearing up for their grand 50th Anniversary Celebration! Named “The World’s Most Magical Celebration”, the festivities begin on October 1, 2021. As Disney has been preparing for the magical celebration, the Cinderella Castle has undergone a major makeover with plenty of “EARidescence” décor. The Castle is shimmering and sparkling! Well… mostly. There is one hiccup which we’re sure Disney will fix in no time. Recently, a piece of the hurricane resistant décor has fallen off.

As reported by InsideTheMagic: “Even though the castle has been deemed hurricane-proof, it seems that some aspects of the décor may not be as sturdy as they once thought. On a visit to Magic Kingdom, we noticed that one of the diamond jewels had fallen from the drapery. Below, you can see a photo of what the jewel typically looks like when securely fastened to the castle.”

Oops! It worries us a little as hurricane season is no joke in Florida, but the Castle has been built to withstand high winds. Hopefully, this is just once piece of décor that wasn’t secured as tightly as needed.

Above is the art rendering above of what the final touches of the Cinderella Castle will look like when they are complete. As you can see in the artist rendering, the Castle will feature golden bunting and a 50th anniversary crest as part of its festive new look. Just look at all that bling!

“The World’s Most Magical Celebration” kicks off on Oct. 1, and will last a full 18 months. Check out all the exciting details Disney has revealed thus far here. We’re sure the Castle will be in pristine condition soon enough!