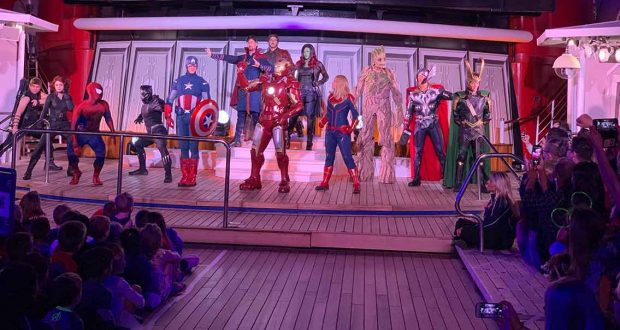 Day 4 Aboard The Disney Magic Cruise – Marvel Day at Sea!

It’s day 4 of our voyage and the Disney magic is just getting started! There’s a rumor that Tony Stark will introduce a brand new technology tonight on the Disney Magic and a number of the Avengers have assembled on the ship for the occasion. Also, there is always concern that Hydra may sneak aboard so I’m glad the Avengers are here to protect the guests and crew! Here’s a look at our Marvel Day At Sea: 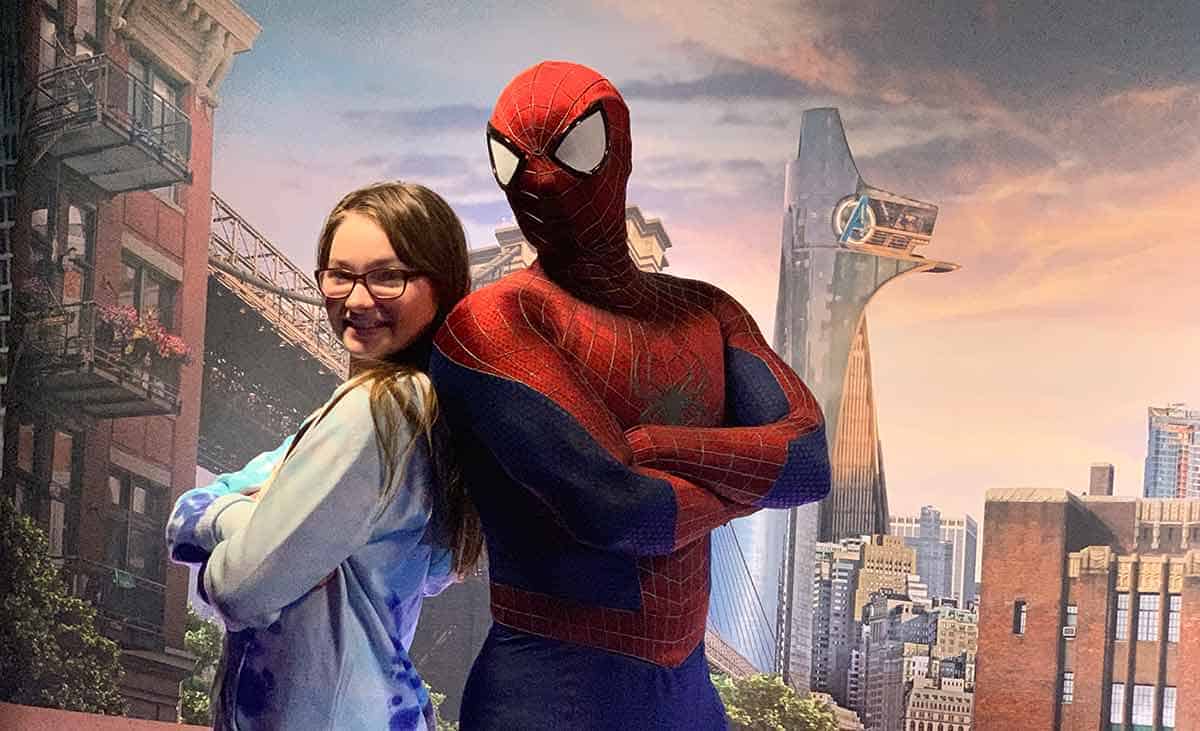 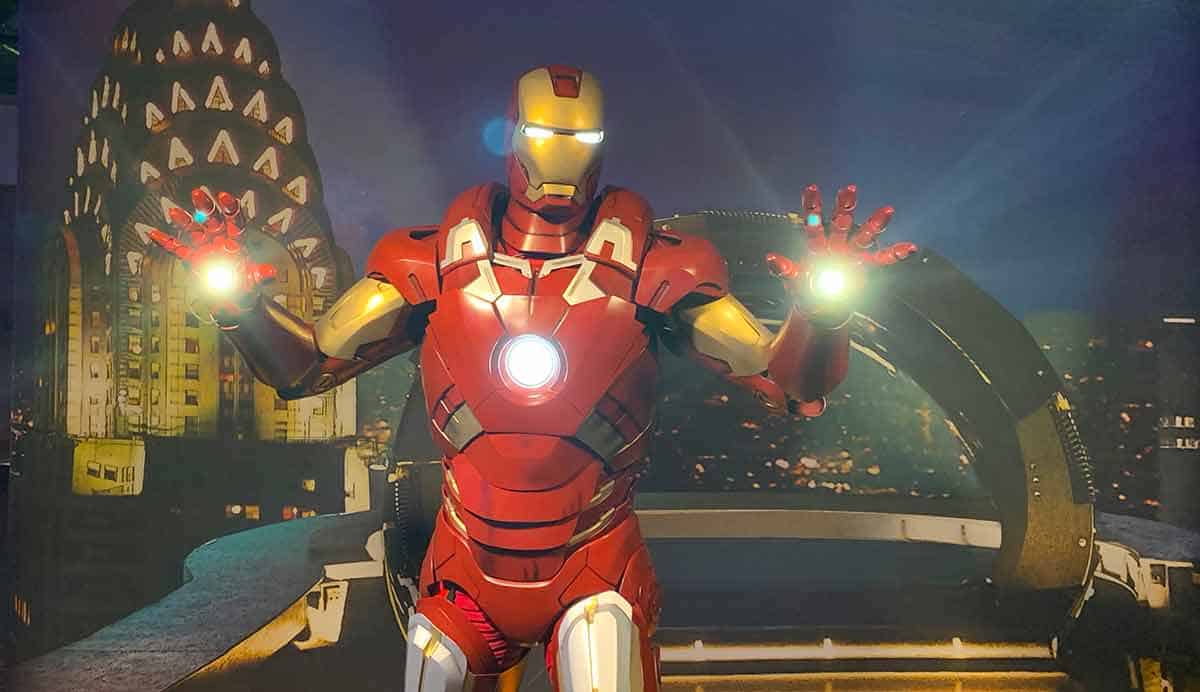 Today we’ve been joined by a bevy of super hero’s including Black Widow, Hawkeye, Iron Man, Dr. Strange, Captain America, Thor, Black Panther, Spider Man, Star Lord, Gamora and my personal favorite – Groot. We signed up to meet a trio of Avengers this morning in D-Lounge. Spider Man greeted us first with his unbridled energy and enthusiasm. Then Black Panther was very kind and regal in his manner as he posed for photos with my family. Then the indomitable Tony Stark as Iron man with more than a little lovable arrogance showed off his suit and welcomed us to his special day at sea! 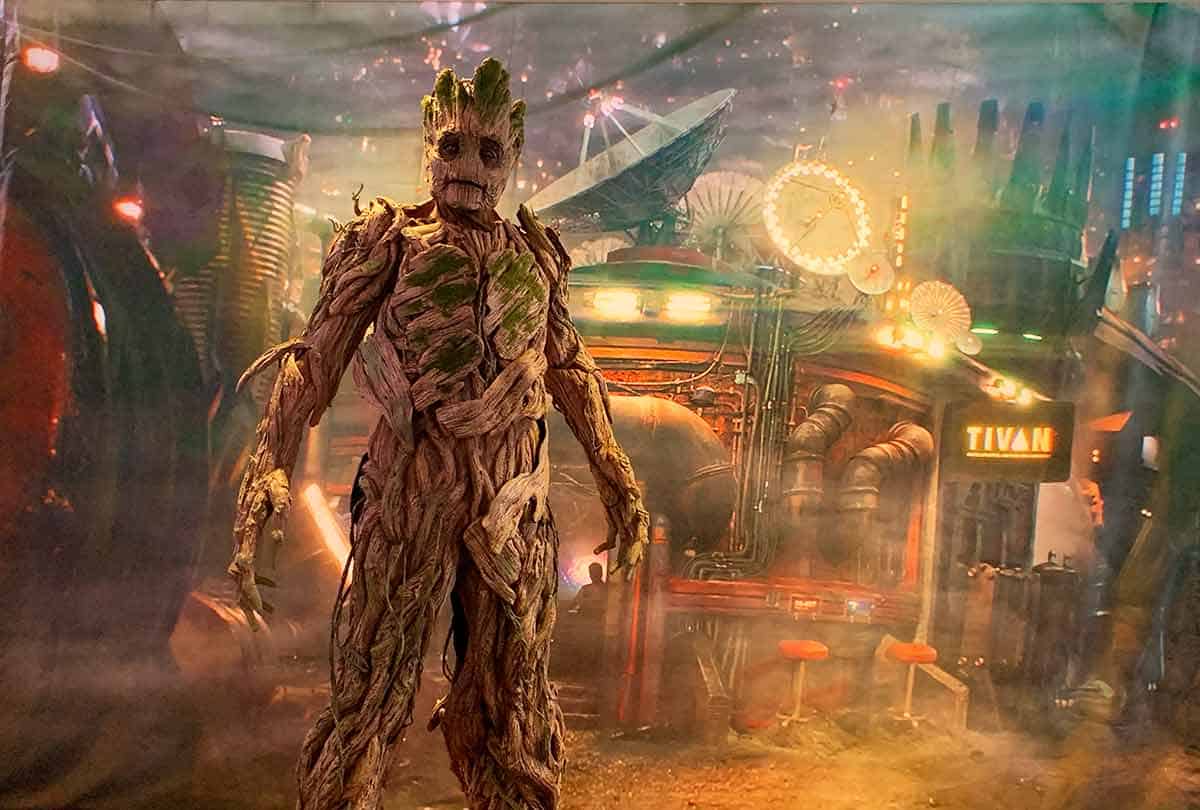 Except for meeting Chewbacca in Disney’s Hollywood Studios, I’ve never been as awe inspired meeting a character as when I walked into a second character meet and greet and saw Groot. He stood about 8 feet tall and instantly reached for us as we got our turn to interact with this stunning fellow. My daughter proceeded to dance like baby Groot in the movie and Groot took the opportunity to copy her motions and get into the groove! Any question we asked was answered with the always appropriate “I am Groot!”

Hugs were exchanged or rather we were enveloped by his enormous arms. When it was time to take a photo of he and my daughter he leaned down and extended his hand for her to hold. I darn near cried! This and the above character experiences are available to guests but you must sign up before the cruise online after your register. Both are well worth the effort so reserved your spot early!

Throughout the day, we would hear ship-wide announcements directed at the
Avengers as they arrived to the ship. “Thor, please report to guest services! Your special item has arrived and none of the ship staff can move it.” These delightful interruptions throughout the day whether we were poolside or in a restaurant solicited a smile and a chuckle.

Our rotational dining took us to Animator’s palette for our evening meal. I sat down and noticed the napkin adorning my plate was in the shape of the Avengers “A.” The menu for adults featured a variety of food options themed for specific Avengers. For instance Black Panther offers a Kachumbari Salad and Wakandan Piri Piri. Malibu loving Iron Man featured a California cherry and walnut salad for appetizers. 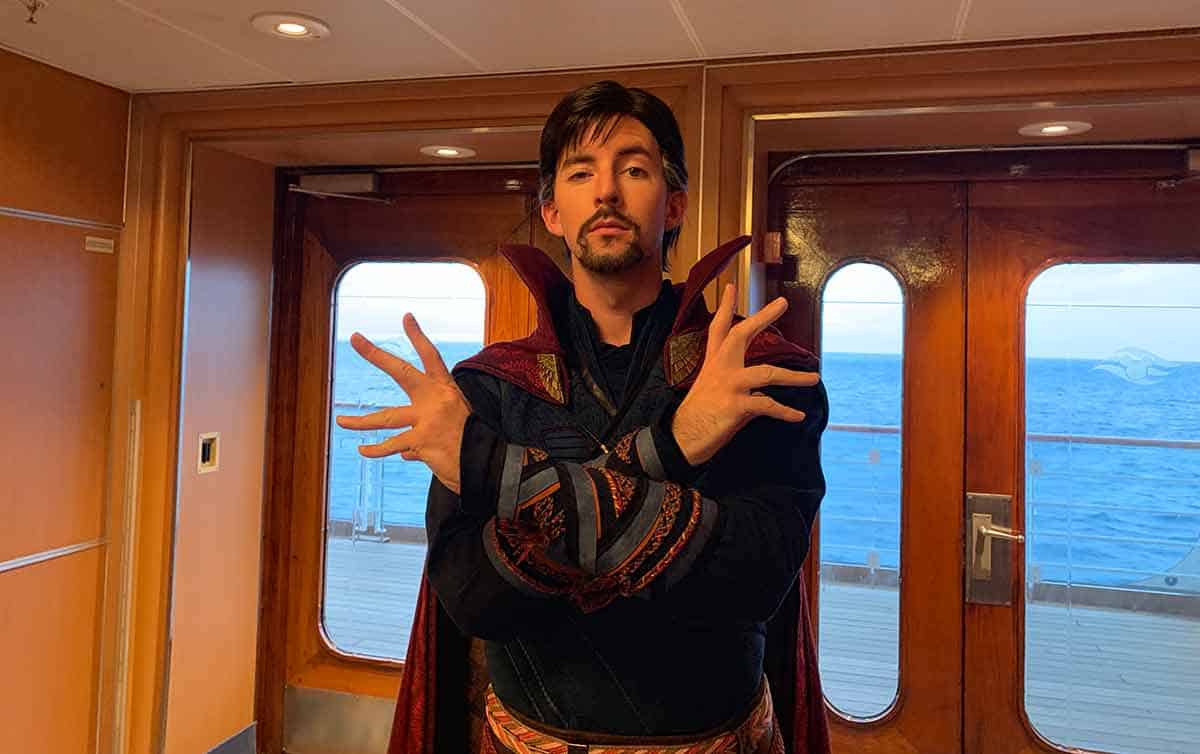 Music playing ship-wide in the public areas were from Marvel movies and lent a decidedly adventurous mood to the entire day. Disney Crew Members wore Marvel inspired attire like red vests with superhero insignia or an Avengers tie.

After the early seating at dinner, we meandered out two the lobby atrium to see what Disney characters might be available for an autograph or a photo. There is always live music to enjoy in this area echo night of the voyage, but this evening things took an unexpected turn. We looked up on one of the higher levels of the atrium to see Star Lord and Gamora followed by Groot walking along the deck. They headed to a balcony between the main elevators and proceeded to dance to the music provided by the musicians and singers at the base of the beautiful staircase in the lobby. This went on for about 30 minutes and included a great deal of dance moves from Star Lord and Groot but Gomorrah didn’t look impressed. Black Panther also made an appearance and greeted a few guests as he took in the musical display. 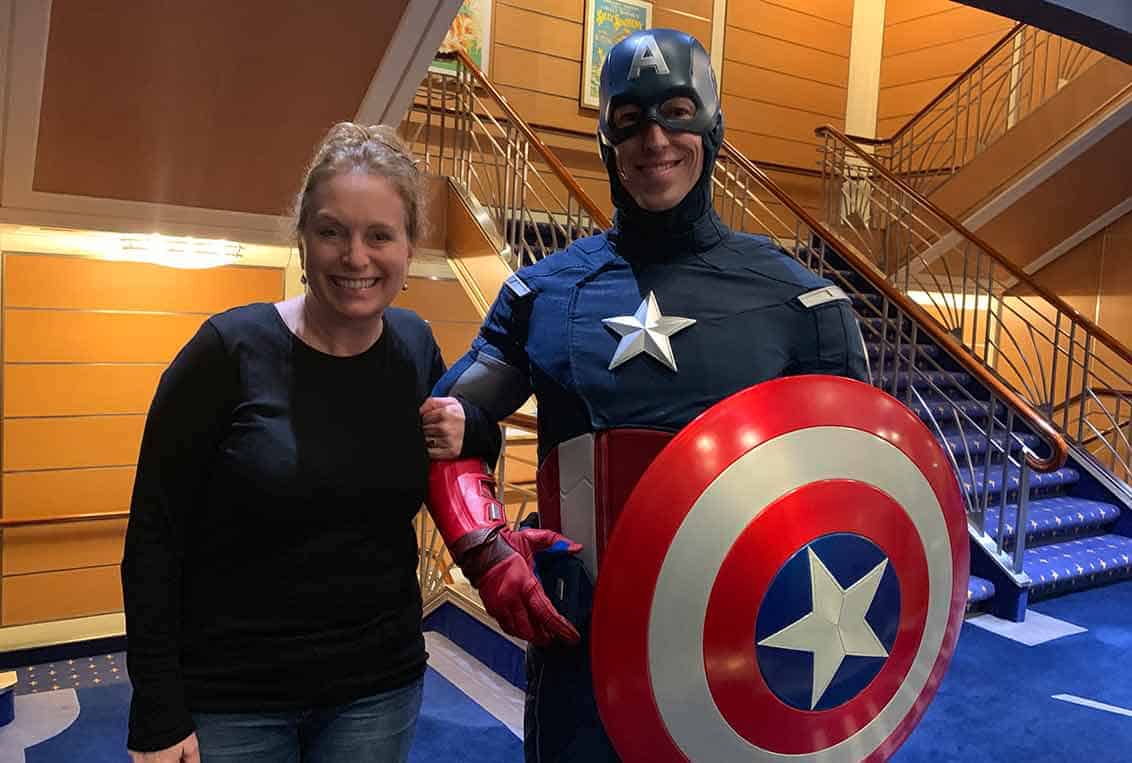 This part of our Marvel Day at Sea had a much more impromptu feel than the lines queue’s in Disney parks. We even ran into Spider-Man, Captain America and Dr. Strange getting off an elevator. Each stopped for a quick chat, hugs and photos.

We made our way to deck 9 to see what startling invention Tony Stark would reveal. All the Avengers appeared one-by-one as the new tech was announced and that’s when the real fun began! Spoiler alert! You can watch the entire presentation on the video included below. I would write more about the evening activities but you truly have to see it to believe it! 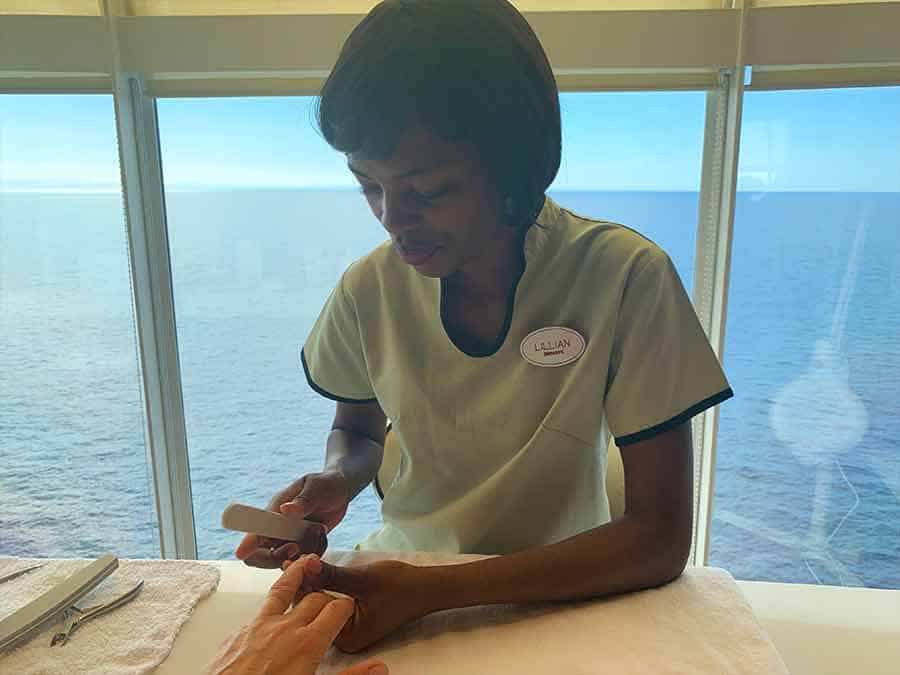 8. I almost forgot to mention!

I went to the spa for a little r&r. My nails were a little worse for wear after digging n the sand with my daughter on Grand Caymans. A lovely young woman gave me a stupendous manicure and pedicure. I’ve got to put my best hand and foot forward on the Disney Magic where you never know what superhero you’ll meet right around the corner!

Disney’s Marvel Day At Sea exceeded our expectations! Disney Cruise Line will be my first choice for all other sea voyages my family takes. And since they have cruises all over the world including Alaska, the Mediterranean, Europe and many more, I have the luxury of discovering the wonders of the world from a Disney Cruise boat! Marvelous!

Interested in Cruising with Disney? Read about our other days aboard the Disney Magic.

Day 2 – At Sea Aboard the Disney Magic