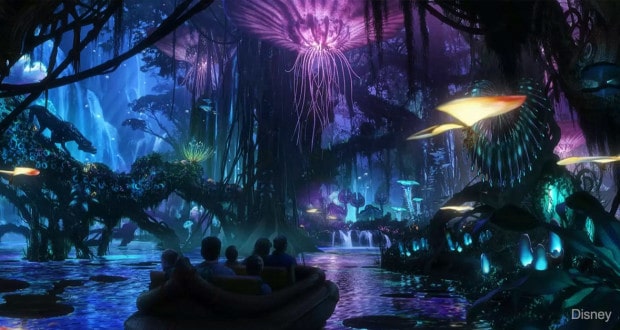 Back in August, at the 2015 D23 Expo, Disney revealed the name of the new AVATAR-themed land and one of its attractions. Now they are releasing more news coming out of D23 Expo Japan, where Bob Chapek, Chairman of Walt Disney Parks and Resorts, shared more about the expansion.

Pandora – The World of AVATAR will bring a variety of new experiences to the Park, including a family-friendly attraction called Na’vi River Journey. The adventure begins as guests set out in canoes and venture down a mysterious, sacred river hidden within the bioluminescent rainforest. The full beauty of Pandora reveals itself as canoes pass by exotic glowing plants and amazing creatures. The journey culminates in an encounter with a Na’vi shaman, who has a deep connection to the life force of Pandora and sends positive energy out into the forest through her music.

Na’vi River Journey will open with Pandora – The World of AVATAR in 2017. According to Yahoo news James Cameron is recently let fans in on some additional details about the Avatar expansion in Disney’ Animal Kingdom Park in Florida. Cameron was quoted, “It’s going to have floating mountains. It’s pretty cool,” says Cameron of “Pandora: The Land of Avatar,” a new theme park area due to open at Florida’s Walt Disney World in 2017. That park name seems to come directly from Cameron. He was speaking at the Hero Complex Film Festival and took the time to release the name and more details about the Animal Kingdom expansion project. “It’s a land within the park but a land is not just a ride. There will be several rides and a number of other attractions. It’s really just a place you’re gonna wanna go and hang out,” the director said, as reported by SlashFilm. “It’s gonna be gorgeous. Of course it’s gonna be gorgeous at night and they’re using every new trick, every new bit of technology that they’ve created.”

Wanna learn more about Avatar in Animal Kingdom? Here’s an article we posted some months ago entitled:

I love all things Disney, but I admit that when I heard that AVATAR was coming to the parks, I was a bit stumped. After hearing about the expansion and seeing some concept art for the new land, however, I’ve come around to the point of being excited. After all, a major park expansion is something to look forward to, regardless of the content. If you’re one of the people who are still less than enthused about Pandora: The World of AVATAR coming to Animal Kingdom, it’s my hope that after reading this article you’ll be able to find at least a little something about the expansion to look forward to. The expansion is described as an immersive experience for guests, who will feel like they’ve been transported to Pandora, the planet (actually, moon) featured in the AVATAR films. Early reports indicate that there will be at least two feature attractions in the area: one, a simulation of a ride on a banshee, and the other, some type of boat ride through a luminescent forest. Surely there will be plenty of theming and other minor features throughout as well. The most obvious issue surrounding the AVATAR project, however, seems to be the controversy it generates among Disney fans. This article will take a look at some of the issues that people are concerned with and suggest some alternate points of view. Of course, it doesn’t matter whether we think AVATAR belongs at Animal Kingdom or not: it’s coming!

Yes, Avatar is rated PG-13 (mostly for violence and perceived “nudity” of the Na’vi people). While I agree that shielding young children from movies that are too mature is a sound idea, I also think that we need to be realistic about what movies kids (especially older ones) gravitate to. Other popular film franchises, such as Guardians of the Galaxy and Pirates of the Caribbean, are also rated PG-13 and have increasing presence in the parks.

On the other side of the coin, AVATAR is also heavily focused on some themes that are very much in line with Animal Kingdom’s, philosophy. One of these themes is that living harmoniously with nature and respecting the environment is of paramount importance. Thematically, this makes AVATAR a good fit for Animal Kingdom, which is always very conservation-focused and eco-friendly.

2. This movie is five years old. Why are they building this land now?

There are 3 AVATAR sequels yet to come, said to be released in 2016, 2017, and 2018. The appeal of the film series and associated characters and merchandise is only likely to grow over time.

3. This is an animal-centered theme park, and AVATAR doesn’t have anything to do with animals.

First, habitat loss is the biggest reason why animal species are dying off in the world, and this is an important theme in AVATAR. AVATAR addresses the selfish way that humans plunder the earth for resources with little regard for its impact on the environment. Also, you may notice that there is a dragon on the sign at the entrance of Animal Kingdom (along with a lion, giraffe, triceratops, and gazelle). The dragon is thought to represent one of the lands that was initially planned as part of the park: Beastly Kingdom. Animal Kingdom has always been open to mythical kinds of “animals”, so Avatar, with its fantastic flying banshees, should be able to fit right in.

4. Disney should come up with its own ideas, not partner with other franchises.

This is an argument heard by many a Disney purist. As someone who really loves the purity of the Magic Kingdom, I can understand this argument. I adore being submerged in the “classic” Disney experience as much as anyone. That being said, I am also a fan of Star Wars. Seeing Star Wars characters and attractions at Hollywood Studios is fun for me- but I wouldn’t want to see them at the Magic Kingdom. I understand both sides of this argument, but also know that how I feel about what franchises Disney acquires doesn’t change what they do. I’ve tried my best to be open-minded about enjoying all of the offerings in the parks. You don’t have to be a fan of AVATAR, Star Wars, or Marvel films to enjoy a good ride or entertainment option. Let’s not forget: Pixar isn’t “classic” Disney either, but I don’t hear too many people complaining about the presence of Monsters Inc., Toy Story, and Finding Nemo in the parks. In time, we’ll adjust to the changing face of the Disney experience if we let ourselves.

… And 5 Reasons Why They Should Be

For those of you who fall squarely into the “AVATAR doesn’t belong” category, here are some questions that even you can probably answer “yes” to.

1. Do you like dark rides? How about sailing through an imaginary world in a boat?

Chances are good that if you enjoy Disney theme parks, you enjoy the occasional dark or boat ride. Disney is great at creating these classic rides, some of which use a boat to help you travel through an imaginary world. If you like the Jungle Cruise, Pirates of the Caribbean, or it’s a small world, you know what I’m talking about.

I can’t presume that you specifically are a fan of the ride, but I’m playing the odds here. Soarin’ is the most popular attraction at Epcot, and sees some of the longest wait times of any of the attractions in the four main parks. I can only expect that the forthcoming banshee attraction, which is said to be similar to Soarin’, will also be hugely popular. You can be a fan of Soarin’ without having any connection to the state of California. I expect that even people who aren’t fans of AVATAR can enjoy the new simulation ride, too.

3. Do you love Disney’s rich details and immersive experiences?

I’m not quite sure how Disney will achieve this, but the promise some sort of luminescent forest in the new AVATAR-themed land sounds pretty exciting. Personally, I think fans and critics of the movie and the expansion will all line up to see that. I imagine that a project costing $500 million will be pretty impressive in terms of beauty and details.

4. Would you like Animal Kingdom to be more of a “full-day park”?

I can already spend a full day at Animal Kingdom, and if you’re struggling to do that then I urge you to check out our article, “15 Things You Won’t Want to Miss at Animal Kingdom.” However, Animal Kingdom does have fewer attractions than the other parks, and I agree that it could use some additional headliners to distribute crowds. The complaint that Animal Kingdom is only a “half-day park” is so common that I’m assuming most of the people who are disappointed with it would be thrilled about an expansion of any kind.

Of course you do! One of Animal Kingdom’s biggest disappointments is that it closes early (sometimes as early as 5pm in the off-season). There are no evening entertainment options currently, but when Pandora opens in a few years, there are plans to unveil a show called “Rivers of Light.” The show is supposed to involve projection onto the Tree of Life as well as glowing lanterns and floats on the rivers surrounding Discovery Island.

In closing, let me say this: despite the rose-colored glasses I have donned to look at the Animal Kingdom expansion, I do understand the critiques. Sure, Disney has done some things in the parks that may have broken some hearts along the way (mine included). A prime example- removing 20,000 Leagues (sob) was heartbreaking, but it eventually paved the way for New Fantasyland. At the end of the day, if you’re still not able to stomach the presence of AVATAR at Animal Kingdom, skip the new section and enjoy very short lines on everything else in the park.

Time to weigh in! Do you love the new expansion plans? Still not enthused? Share your comments!