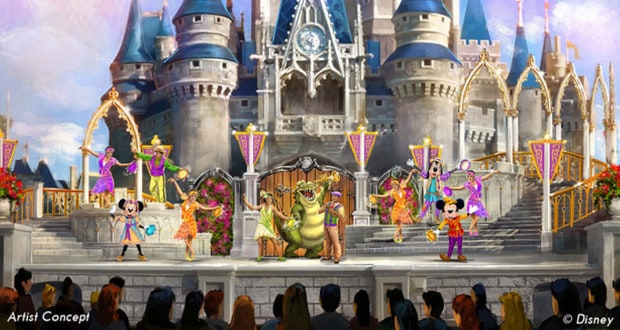 Prepare for an interplanetary adventure that transports you straight to the center of the Star Wars galaxy! Disney’s Hollywood Studios has unleashed the Force for a magical journey that’s out of this world. Travel to Jakku via Star Tours: The Adventures Continue or encounter Kylo Ren at the Star Wars Launch Bay. Determined to conquer the dark side? Younglings can sharpen their saber skills at Jedi Training: Trials of the Temple. Then, step aside as the intimidating Captain Phasma leads a squad of striking Stormtroopers in the March of the First Order! Chill at Epcot with new attractions, entertainment and lots more fun for the whole family! This summer, set sail for Arendelle’s wintery wonderland with brand-new Frozen happenings—attractions, entertainment and shopping—all across the Walt Disney World Resort. Hop aboard Frozen Ever After for an unforgettable adventure as you sail off to North Mountain, the willow forest and beyond. Then stop by the Royal Sommerhus to meet Anna and Elsa in person! Want to show some love for everyone’s favorite snowman? Head over to Disney’s Hollywood Studios for a sing-along and visit the Celebrity Spotlight for a meet-and-greet with Olaf! Experience world-class attractions, fantastical fireworks and a new show at the most magical place on earth! Here’s how Magic Kingdom Park adds a dash more dazzle for incredible memories kids—and kids at heart—will never forget. Beginning this summer, Mickey Mouse and company star in Mickey’s Royal Friendship Faire, a new musical adventure featuring your favorites from The Princess and the Frog, Tangled and Frozen. A timeless tale of diversity, loyalty and the bond between friends, the show debuts original songs and dance numbers that’ll keep every toe in the house tappin’—you can’t help but sing along!”

Promo Details: Awaken Summer and Save up to 30% on Rooms at Select Disney Resort Hotels

Soak up the magic at all 4 parks and save up to 30% on rooms at select Disney Resort hotels for stays most nights June 12 through August 25, 2016.

Check availability for other great rates for stays most nights May 30 through June 11, 2016. With this great offer, you’ll have time to explore it all! For example, when you book a 5-night stay most nights June 12 through August 8, 2016 at select Disney Value or Moderate Resort hotels this summer it’s like getting a night free!

As a fun bonus, when you create a package by adding a minimum 2-Day Magic Your Way ticket, you’ll receive a special “Awaken Summer” MagicBand. Exclusive Magic Band will awaken delight with special lights and sounds at all touchscreens in parks and Blizzard Beach. Special graphic design too. At MK music from new Mickey’s show will play, at Epcot music from In Summer will play, HS music touch screens will play music from imperial march, BB8 sounds or Thai Fighter sounds, River of Light Music will play at Animal Kingdom. At Blizzard Beach it is sounds of Christof and Sven.

BONUS TIP: Get full promotional details and tips by booking your summer Disney trip with an Authorized Disney Vacation Planner you can trust like MickeyTravels. They’ll help you get the best Walt Disney World deal, share expert advice and their services are totally FREE! It’s genius! 2016-03-15
Becky
Previous: Can You Guess The Disney Song Based On The First Verse?
Next: 12 Rookie Mistakes People Make at Epcot