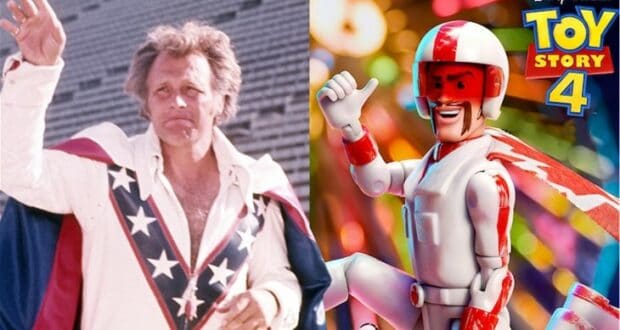 Toy Story 4 was another Disney/Pixar success when it released last summer. Well, now it seems Disney is in a little turmoil over one of the fun new characters featured in the film – the fearless Duke Caboom! The big question… does Duke (Canada’s greatest stuntman) resemble Evel Knievel?

As shared by ComicBook.com: Disney is being taken to court over their character, who was a fan-favorite and quickly spawned merchandising. According to a report from TMZ, a company called K&K Promotions, headed up the late Evel Knievel’s son that owns the copyright and trademarks for the stunt performer, has filed suit against Disney, Pixar, and other subsidiaries of The Walt Disney Company asking for a damages to be paid out.

The suit alleges that the character and film is littered with homages and nods to Knievel’s dress, noting that the toy of Duke Caboom itself seems to be directly lifted from a similar 1970s toy featuring Knievel. They also note that those involved with the film went out of their way to never mention Knievel in interviews while promoting the movie.

We’ll keep you posted as this lawsuit unfolds!

2020-09-23
Jamie Sylvester
Previous: EPCOT Fireworks Are To Be Tested After Park Hours on Sept. 23
Next: Virtual Waiting Room Used For shopDisney – But No Luck on Main Attraction Merchandise Here