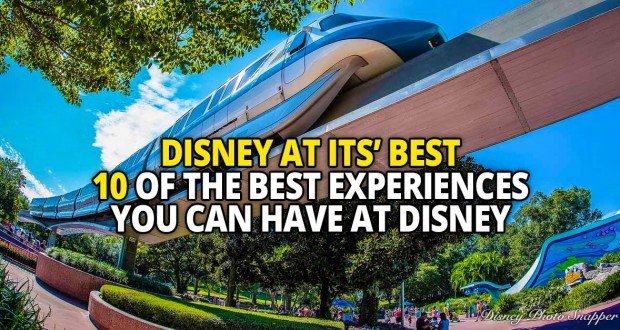 If you’re a Disney Fanatic like me, you might feel like everything about Disney is the “best”. Disney has the best rides, the best accommodations, the best food, and the best overall vacation experience to offer. But I’m often asked, “If you could only pick a few things to do at Disney, what would they be?” Here is my top ten list of Disney “non-negotiables” (in no particular order). You don’t want to leave Disney without doing them!

While I am a huge fan of all Disney entertainment, I don’t think I feel quite the same about any other show as I do about Fantasmic! This show incorporates all of the Disney “bests”. There are Disney characters, Disney music, dancing, pyrotechnics, and some truly amazing special effects. If I could only see one “show” on my Disney vacation, this would be it.

Entire websites have been devoted to this creamy, pineapple-y frozen confection. It’s only available at a FEW select locations in all of the Walt Disney World resort and I have been known to wait up to 30 minutes in line to get my hands on one (and there isn’t ANYTHING else I’ll wait in line for at Disney). You can order just a cup of the Dole Whip, or order my personal favorite, the Dole Whip Float (pineapple ice cream floating in pineapple juice). Complete and utter deliciousness.

Disney has worked very hard to offer on-site hotel rooms that are financially accessible to people on all kinds of budgets. Value Resorts, like All-Star Music or Pop Century, have room rates as low as $85 per night during certain times of the year. There are perks that come with staying on-site, most notably extended theme park hours and free transportation to and from all theme parks, resorts, and Downtown Disney. Even if you don’t have the financial means to stay at a Disney Resort Hotel each time you visit, I highly recommend trying it a least once.

7. EAT AT A SIGNATURE RESTAURANT

Many people imagine “theme park” food a certain way. Burgers, fries, pizza, and hotdogs are typical finds in other theme parks around the country. While Disney does offer these “staple” foods as a quick eating option, they also have many fine dining options, including several of what Disney calls their “Signature” restaurants. Some signature restaurant offerings around the resort include Maize-crusted Monkfish (at Jiko), Oak-grilled Filet Mignon (at Citricos), and Pan-seared Porcini Powder-dusted Pork Tenderloin (at the Brown Derby). Dining at Disney can be a very memorable experience!

There are several rides in the Magic Kingdom that are Disney “originals”. Although Walt Disney World didn’t open until after Walt Disney had passed, several of the rides are replicas of those found in the Disneyland Park and Walt had a direct hand in their conception and design. Among these are Pirates of the Caribbean, “it’s a small world”, and Jungle Cruise. And while I can’t say that any of these rides are among my “favorites”, I always ride at least one of them on each and every trip. What can I say? Riding them makes me feel a little closer to the “Man behind the Mouse”.

Just before the Wishes Nighttime Spectacular each night at the Magic Kingdom, there is a 10 minute “pre-show” called Celebrate the Magic. During the show, the castle is used as a giant projection screen, featuring clips from popular Disney films. The entire show is set to Disney music, and the castle is completely enveloped in beloved character images and color. And while I love Wishes fireworks, I have to say that I love this pre-show even more. It’s truly a sight to behold.

I am a huge fan of resort hopping on my extended Disney vacations. Each and every resort in Walt Disney World is spectacular in its own right, and I enjoy the opportunity to check out the beautiful grounds of each one and see what special sights and sounds they have to offer. There are a few resort hotels that really stand out as being extraordinary, and Animal Kingdom Lodge is definitely my personal favorite. The lobby of Jambo House is absolutely breathtaking, and just behind it is the Savannah which is home to many varieties of African wildlife. There is no charge to view the animals, and there are wildlife experts available to answer any questions you might have. It’s a very short bus ride from Disney’s Animal Kingdom park, and this visit would make a great mid-day break if you’re looking for one.

“PLEASE STAND CLEAR OF THE DOORS! !Por favor manténgase alejado de las puertas” No visit to Disney is complete without hearing those magical words on the Monorail. The Monorail is an icon of the Walt Disney World Resort, and offers incredible views of the Seven Seas Lagoon. Take the time to ride the complete resort hotel loop. You’ll want to make it a traditional vacation activity once you do!

There’s a good reason why certain rides at Disney are referred to as “headliners”. They are attractions that offer experiences you won’t easily find anywhere else in the world. Some of these rides include Soarin’ at Epcot, Tower of Terror at Hollywood Studios, and Expedition Everest at Animal Kingdom. If you plan to ride any of these uber-popular rides, be sure to have your Fastpasses secured in advance! “Headliner” = LONG STANDBY LINES!

I end each and every Disney vacation with breakfast at the Kona Café in the Polynesian Resort. And each and every time I get Tonga Toast. What is Tonga Toast? Well, in brief, it’s heaven on a plate. But in the interest of full disclosure, it’s a GIGANTIC hunk of sourdough bread, stuffed with fresh bananas, deep fried and coated in cinnamon sugar. And if that weren’t enough, it’s served with a side of fresh strawberry compote (which I’m always tempted to drink directly out of the container with a straw). When it arrives at the table, you’ll think, “There’s no way I’m going to be able to eat all of that.” And as you’re taking your last bite, you’ll be thinking, “I wish there was more.”

Are there any other “non-negotiable” Disney activities for you or your family? Leave us your comments below!

– 9 Sensational Disney Experiences You Probably Haven’t Had Yet