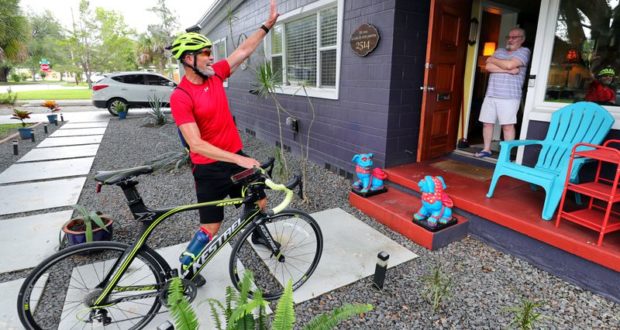 Ready for a feel good moment?! Thanks to Disney Cast Member, Billy Flanigan, we are rolling into the middle of our week with a smile! This Disney entertainer went above and beyond when COVID-19 hit, bicycling 3,000 miles to bring a little cheer to 265 friends and colleagues.

According to OrlandoSentinel.com, Flanigan, an entertainer at Walt Disney World for nearly 40 years, has ridden his bicycle thousands of miles the past few months, undertaking a lot of physical work for a simple mission: Deliver a little cheer. “This is my way to be social and be safe at the same time,” Flanigan said. “I ding-dong the doorbell, back up and do my song and dance.”

His simple tune, personalized for the recipient, comes with choreography and the trademark Flanigan smile that has entertained Disney visitors in such shows as “Finding Nemo — The Musical,” “Tarzan Rocks!” and the “Hoop-Dee-Doo Musical Revue.” The surprise visits even have been named by a friend: A “Flanigram,” and social media accounts are full of photo-filled posts exclaiming “I’ve been Flanigram-ed!”

Shortly after Walt Disney World shut down because of the coronavirus pandemic, Flanigan was riding his bicycle when he realized he was near the home of friend Hannah Laird. “I think I’m going to say hello,” he remembered thinking. Later, on social media, she described the experience: “He stood on the sidewalk and I sat on my stoop and we chatted for a while,” she wrote. “When he left, I burst into tears. I hadn’t seen my friends or cast mates in weeks, and it was amazing to have a face-to-face interaction with someone (safely distanced, lol!).”

Walt Disney World Cast and Community took to Facebook to say: “We love hearing stories of our Cast Members making magic in the community – and this one definitely brought a smile to our faces…and a song to our heart. #Sharing Orlando Sentinel’s coverage of one Entertainment performer and his unique way of staying connected to friends and fellow Cast Members…thanks to a bike, boundless energy and a friendly spirit that inspires us all!”

Way to go Billy! We’ve been “Flanigram-ed” by just reading this story!