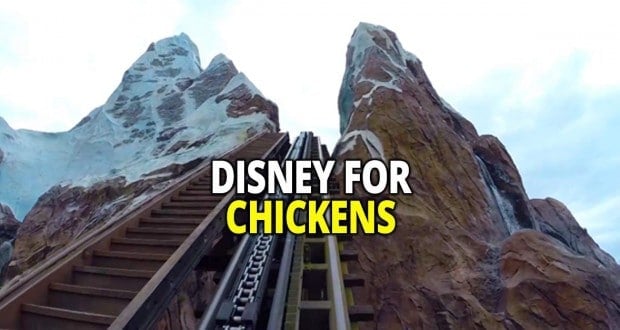 Disney For Chickens – Walt Disney World for the Faint of Heart

When people find out that I am a self-proclaimed Disney Fanatic, they often regale me with a list of their favorite Disney rides. These conversations often begin something like this: “Oh, wow! Don’t you just love Space Mountain!” or “Expedition Everest is awesome! I could ride it over and over again!” I always smile and nod approvingly, but in my heart of hearts I’m thinking, “NOOOO!!” I often say I love everything about Disney, but the real truth is that I’m TERRIFIED of many of the most popular rides. I’ve compiled the following list of “safe” attractions in each theme park for all of my fellow cowards out there.

1. THE “COMPLETELY AND UTTERLY SAFE” (AKA rides that wouldn’t even unnerve a toddler)

2. THE “PROBABLY OK BUT…” (AKA rides you might need to avoid if you have a specific issue or phobia)

3. THE “I MIGHT BE OK BUT I NEED TO KNOW WHAT I’M GETTING MYSELF INTO” (AKA small children might be pointing and laughing at you but better to be safe than rocking in the corner)

Star Tours – This is another “simulated” ride, this time through space. The passenger vehicle does actually move around some, but the movie on the screen in front of your gives your brain the illusion of interstellar travel. If you’re feeling nervous while on the ride, you can always close your eyes to minimize the experience.

4. THE “DON’T EVEN THINK ABOUT IT” (AKA riding these might cause you to have a panic attack and/or cry)