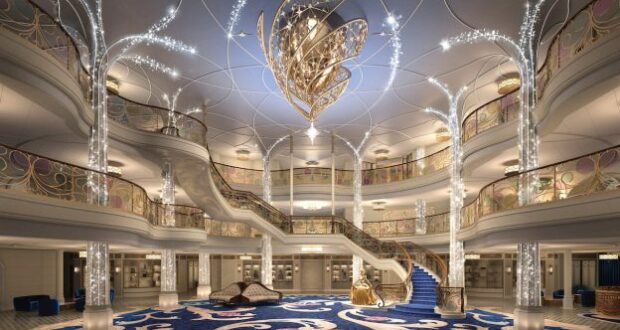 While we’re awaiting the Disney Cruise Line’s virtual reveal of their newest ship, Disney Wish, at the end of this month (April 29), Disney has released a new design concept in advance! Check out the details below.

As shared by Disney: The design of the Disney Wish centers around a motif Enchantment! How this motif is expressed throughout the design will be as much a reflection of the ship’s distinctive personality as of the wide range of stories that will be represented on board, from Disney and Pixar to Marvel and Star Wars. Take a look at this video – the first in our Designing the Disney Wish series:

The design image of the Grand Hall was previously released as follows:

Now, the new art rendering is revealed as the following:

To learn more about the enchanted ship design and the Grand Hall, visit DisneyParksBlog. We’ll be sure to reveal more news as soon as it is shared about the Disney Wish. We’re hoping April 29 will give us more insight on what we can expect from this newest ship in the Disney Cruise Line fleet.