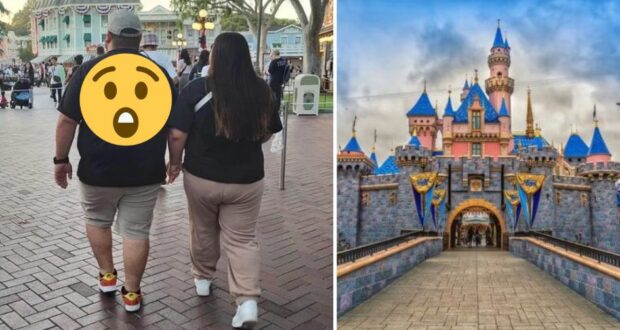 Disney and its dress code have been a center of heated discussion among Disney fans in recent months. Now, a new image showing a Park Guest with a “foul” shirt is the cause for debate.

It wasn’t too long ago we reported the news of a TikTok trend that was going viral. Guests were showing up at a Disney Park wearing short, revealing shirts. Disney Cast Members would source the Disney dress code, take the Guest to the gift shop, and provide them with a voucher to pick out a new shirt.

The “free shirt hack” went viral on social media with Guests attempting to get a free shirt for dressing inappropriately. Disney quickly caught on to the hack and began asking the Guest to purchase a new shirt, go back to their Resort or vehicle to change, or they wouldn’t be allowed into the Park.

Recently, one Guest reported being dress coded for wearing a Princess-style gown. The Guest was labeled a security concern because of the length of the gown, which caused it to drag on the ground.

Now, up for debate is a shirt a Guest wore into Disneyland. The back of the shirt states, “Good Sex, No Stress, One Boo, No Ex, Small Circle, Big Checks” posted via Reddit by u/Complex-Turn-8293 below:

Several comments on the post believe the shirt is “foul” and “trashy” and shouldn’t be allowed at Disneyland, with the posted comment stating, “Why are people allowed in with such foul shirts- why doesn’t anyone have concern over this?“

Others added that this shirt is better than some they’ve seen in the Disney Parks, commenting, “This is downright heartwarming compared to a lot of them” and “Honestly, I’m with you on this. Yeah, it’s middle school edge lording, but it beats the guy running around with a tattooed cartoon penis on his neck for the world to see.”

Should this Guest have been asked to change or leave the Park? Disney very clearly states in its dress code:

“The parks are a casual, family-oriented environment. Ensuring that the parks are family-friendly is an important part of the Disney experience. In that spirit, we ask you to use your discretion and common sense.”

“Inappropriate Attire Disney reserves the right to deny admission to or remove any person wearing attire that is considered inappropriate or attire that could detract from the experience of other Guests. Attire that is not appropriate for the parks—and which may result in refusal of admittance.”

One of the noted refusals of admittance points includes “Clothing with objectionable material, including obscene language or graphics.”

It seems like the Walt Disney World, and Disneyland Resort’s dress code continues to be a regular Disney controversy for sparking debate.