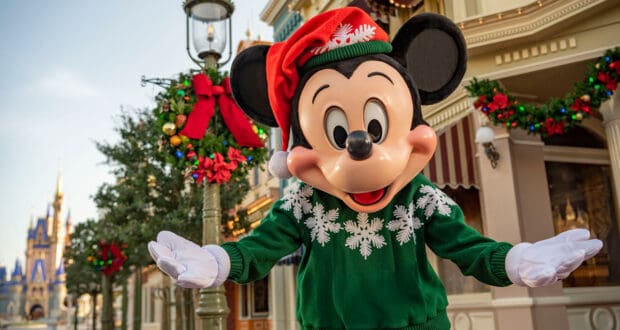 Mickey Mouse is ready for the holidays! Photo Credit: Disney

The Walt Disney Company has reported their fourth quarter and full year earning for fiscal 2020. We previously shared that Disney has reported a net loss of $2.4 billon in fourth quarter earnings. Well, they do have hopes that the holidays will rebound some of the loss with next quarter park reservations at 77%.

As shared by OrlandoSentinel: Executives expect the next few months to be busy in Orlando since about 77% of the park reservations are booked for the next quarter, including an almost completely full Thanksgiving holiday.

Disney CEO Bob Chapek said the reopening is going well enough for Disney World to raise occupancy from 25% to 35%, adding he believes it is still possible to maintain 6 feet of social distancing among visitors with the higher number of people allowed inside.

Do you have holidays plans at Walt Disney World?