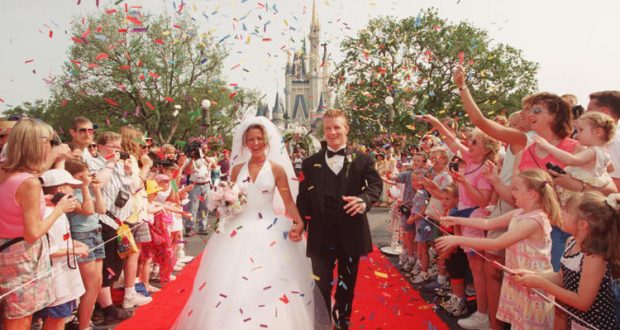 You can take in a lot of interesting sights at the Magic Kingdom in Walt Disney World. Now, you’ll be able to see weddings too. Walt Disney World said “I do” to Magic Kingdom weddings during park hours, announcing Friday it will begin hosting 9:30 a.m. ceremonies at the East Plaza Garden near Cinderella’s Castle. Park goers will be able to see brides in Cinderella’s coach, with trumpeters heralding their arrivals. Receptions will take place at other parts of the resort.

Complete customized wedding packages at “premiere locations such as the Magic Kingdom” for 100 guests start at $75,000.

Disney has hosted weddings for about 25 years. Disney World has more than 1,200 weddings annually at about dozen other spots, including several areas inside Epcot and a gazebo at the Grand Floridian. Prices vary depending on package and location. Magic Kingdom introduced weddings at its train station in 2014 – but only at 7:30 in the morning, before the park opened.

“Couples have been seeking a celebratory location showcasing the iconic Cinderella Castle,” said Korri McFann, Marketing Director for Disney’s Fairy Tale Weddings, in a news release. “We are thrilled to have the opportunity to make those dreams a reality.”

Disney Weddings 2016-04-30
Becky
Previous: Can You Remember EXACTLY What These Classic Pixar Characters Look Like?
Next: 9 Things You Will Love About Jock Lindsey’s Hangar Bar in Disney Springs