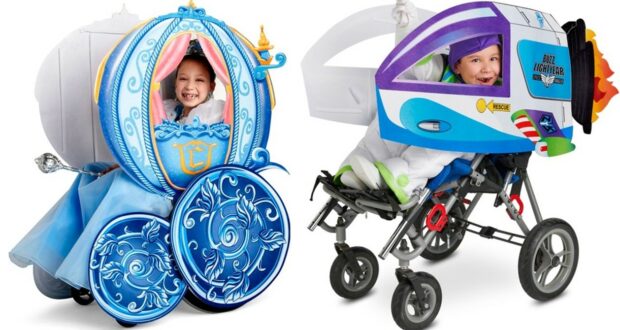 Whether your kiddo is planning on checking out all the goodies at this year’s Disney After Hours Boo Bash, or ready to explore the neighborhood for all those tasty treats, they will of course want to dress up as their favorite Disney character! Last year Disney announced they were launching a new line of costumes to accommodate Disney fans that may be in wheelchairs or have other accessibility needs. We’re happy to say, these adaptive costumes are back for this year’s Halloween season! While many of the costumes selections are the same as last year, we are excited to see a couple of new additions to this year’s adaptive costumes.

Last year the line available on shopDisney included Cinderella, Buzz Lightyear and Incredibles costumes. They all have stretch fabric that opens in back for easier dressing, longer lengths for wheelchair-friendly wear and a flap opening on the front center with self-stick fabric closure for tube access. It looks like this year those favorites have returned with a Mandalorian and Black Panther costume addition! In addition to the costumes, Disney also has three wheelchair cover sets as noted below.

First up, the Cinderella’s Coach Wheelchair Cover Set by Disguise for $49.99. “They’ll feel like true royalty when you transform their chair into a magical Cinderella Coach. Plastic piping adds stability along the wheel covers and long self-stick fabric strips keep the pieces in place for an enchanting dress-up adventure.” You can also purchase the Cinderella Adaptive Costume for Kids for $49.99.

The Incredimobile Wheelchair Cover Set by Disguise – Incredibles 2 for $49.99. “Rev up your child’s chair by transforming it into an incredible super car! The stiff felt with detailed sublimated art looks just like the Incredimobile. Plastic piping adds stability and long self-stick fabric strips keep the cover in place.” Don’t forget to snag the Incredibles 2 Adaptive Costume for Kids for $49.99.

Buzz Lightyear Spaceship Wheelchair Cover Set by Disguise – Toy Story is available for $49.99. “Go to infinity and beyond when you turn your chair into the Buzz Lightyear’s Spaceship with this Wheelchair Cover Set by Disguise. It features stiff felt with detailed sublimated spaceship art, plus plastic piping for stability and long hook and loop strips to keep the costume in place.” Plus, you’ll want to be sure to purchase the Buzz Lightyear Adaptive Costume for Kids – Toy Story for $49.99.

Visit shopDisney to purchase your costumes and/or wheelchair cover sets soon! If we remember correctly, several of these selections sold out fairly quickly at the start of the Halloween season, so don’t wait. Happy shopping, Disney fans!