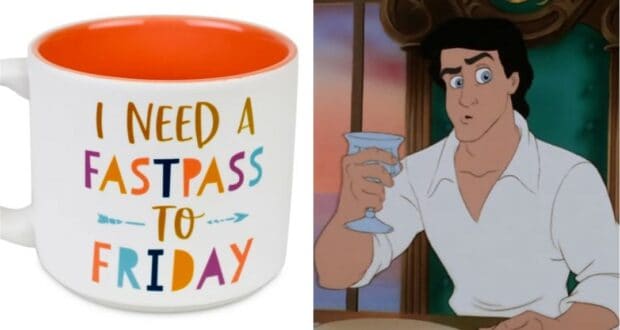 Do you ever come across something that makes you scratch your head? Well, here’s the latest for us! There is a LOT going on at Walt Disney World right now. We’re talking about attractions reopening, entertainment returning, saying goodbye to nighttime spectaculars, and preparing for new ones to arrive. Plus, Disney is hard at work with just 60 days to go until “The World’s Most Magical Celebration” honoring Walt Disney World’s 50th Anniversary. Despite the crowds returning and lengthy lines, Disney has yet to return their FastPass system. Why are we scratching our heads today? Well, Disney has released a new FastPass mug even though FastPasses currently remain unavailable.

Available via shopDisney for $14.99, you’ll find this super cute new mug that says, “I Need a FastPass to Friday”. It’s adorable! We love the colors – and yes, who couldn’t use a FastPass to Friday? But why does Disney decide to release this particular piece of merch right now when FastPass hasn’t returned… and we aren’t sure if it is going to?

Recently, Disney announced that at Disneyland Paris they are dropping the free FastPass service all together and replacing it with something called “Premier Access“. Unfortunately, “Premier Access” will cost you. The cost to use Premier Access for a single attraction can start at 8 Euro dollars. To put it into perspective, that equals roughly $9.50 in United States dollars. If there is a ride you’d like to skip the line for, you’d pay that charge via the app and enter the queue through the former FastPass line. That almost $10 per person price can increase depending on crowd levels and attraction popularity.

We want to say if Disney is releasing a new “I Need A FastPass To Friday” mug, maybe that means they are making plans to return the FastPass system. Unfortunately, we can’t read into it too much! Instead, maybe we’ll buy the mug in case FastPasses go into Disney history. As soon as Disney releases something concrete on the FastPass system at Walt Disney World, we’ll be sure to share the news. Until then, enjoy sipping your coffee from your “I Need A FastPass To Friday” mug!