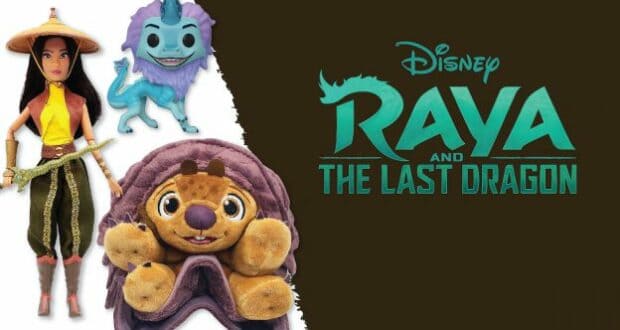 We are just over a week away from experiencing Walt Disney Animation Studios’ newest film, Raya and the Last Dragon! Set to debut in theaters and on Disney+ Premier on March 5th, we simply can’t wait to join Raya on her adventure. In the meantime, Disney is launching new merchandise and I can’t wait for you all to join Raya and her ragtag crew on the journey of a lifetime! Check out the details as shared below by DisneyParksBlog.

In case you don’t know, Disney’s “Raya and the Last Dragon” takes you to the fantasy world of Kumandra, a place where humans and dragons once lived together in harmony. Sinister monsters known as the Druun threatened the land and the dragons sacrificed themselves to save humanity. Now, 500 years later, those same monsters have returned and it’s up to a lone warrior, Raya, to track down the last dragon in order to finally stop the Druun for good…

In anticipation of the movie event of the year, check out some of the epic new products available now as you prepare to set out on your own adventures! Available at shopDisney.com, Disney stores, Walt Disney World Resort and Downtown Disney District at Disneyland Resort

Set off on playtime adventures with new dolls perfect for your young warrior at heart featuring Raya, Sisu in human form and Sisu in dragon form featuring activated lights and phrases!

Get ready for an epic cuddle quest with these amazing plush of Baby Tuk Tuk and Sisu! I mean, how adorable are these two?!

Swing into a little fun with this Ongi mug featuring Pan, Dyan and Uka! Inspired by the lovable creatures this characterful mug features molded details.

Available at retailers around the globe

Funko fans will definitely want to collect all the Disney’s “Raya and the Last Dragon”- inspired Funko Pop! figures including the guardian of the dragon gem herself!

Get ready to play out tremendous adventures with the Raya, Namaari, and Ongis Pack, only at Target. The Raya doll and Namaari doll are poseable and wear fashion doll clothes, including pants, boots, and a cape. Also included are 3 Ongis and fun doll accessories, like a hat and swords.

Showcase your fearlessness with this awesome T-shirt featuring Raya and her unlikely squad! Tuk Tuk is seriously one of my new favorite sidekicks …

Dream of all the adventures waiting for you with The Art of Raya and the Last Dragon, a book featuring never-before-seen development art, character sketches, storyboards, and color scripts and relieve the excitement of the film with this Little Golden Book adaptation!

Jump into Disney Sorcerer’s Arena to enjoy special events and offers to celebrate the launch of “Raya and the Last Dragon” in theaters and on Disney+. All players who log in from March 5 – 6 will receive a free Boun in-game item, plus have the chance to purchase a Sisu in-game item through the Celebration Bundle. Later in March, players will be able to collect tokens to unlock Raya and Namaari as playable characters!

Join Raya on her quest to unite Kumandra once again and see Walt Disney Animation Studios’ “Raya and the Last Dragon” in theaters or order it on Disney+ with Premier Access beginning March 5! Additional Fee Required.