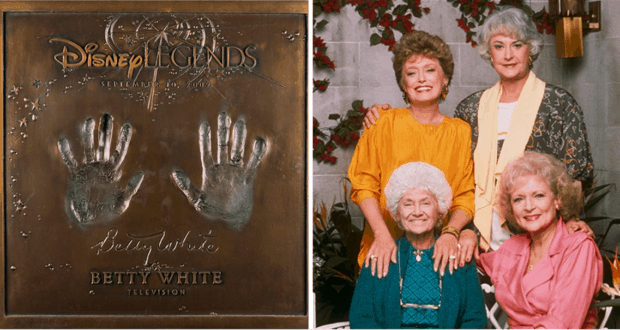 Thank you for being a friend! Today, September 14, 2020, marks 35 years since Touchstone Television’s The Golden Girls first aired on NBC. These Disney Legends are worth celebrating! Check out the details below as shared by D23.

Early press materials describe the show as “[capturing] the humorous and poignant relationships that develop between four single women—two widows, a divorcee and her mother—spending their golden years together in Miami, Florida.” It depicted strong, educated, and independent lead characters in a time when there were fewer dynamic roles for women, especially of a certain age group. Audiences watched the ladies share friendship, squabbles, and cheesecake (more than 80 were consumed!) through seven seasons, clocking in over 175 episodes.

The starring cast included Estelle Getty as Sophia Petrillo, described by show publicity as a “feisty, irreverent” Sicilian mother who goes to live with her daughter, Bea Arthur’s character, Dorothy Zbornak, a “no-nonsense school teacher,” who was equally as sarcastic and witty. Rue McClanahan portrayed Blanche Devereaux, the “man-hunting Southern Belle” who owned the home the ladies shared. Lastly, Betty White played the role of sweet, but “spacey,” Rose Nylund, who often exasperated her roommates with reminiscences about her hometown of St. Olaf, Minnesota. Together, they effortlessly flaunted what women in their golden years could contribute to the world. The show ran through September 12, 1992, but has seen a cult resurgence in the ensuing years due in part to its noted social awareness for the time, strong storytelling, and availability in syndication and streaming.

During its original run, The Golden Girls received 68 Emmy® nominations, winning 11, and 21 Golden Globe® nominations, for which they won 4. All the lead actresses won Emmys for their performances on the show, a feat achieved by few productions. Off screen, these leading ladies were also active in advocating for numerous social causes. Both Bea Arthur and Estelle Getty advocated for AIDS activism and education. Arthur, along with Rue McClanahan and Betty White, also advocated for animal rights. White was named the “Ambassador of the Animals” by the City of Los Angeles for her work in animal welfare in 2006. The Golden Girls themselves were honored as Disney Legends in September 2009 at the very first D23 Expo. Fittingly, their award plaques are all displayed together at Disney Legends Plaza on The Walt Disney Studios lot in Burbank, California.

2020-09-14
Jamie Sylvester
Previous: The Sanderson Sisters Reportedly In Talks to Return For ‘Hocus Pocus’ Sequel
Next: Disney’s Animal Kingdom Is Open For One Extra Hour Sept. 20