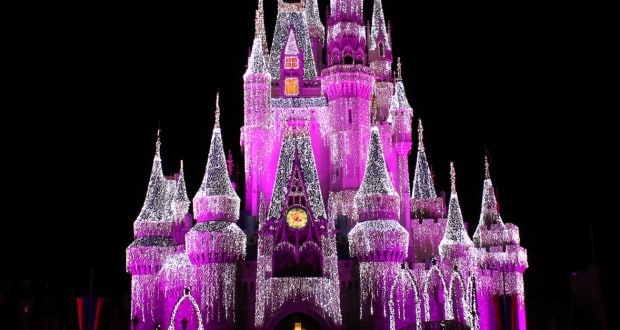 Disney at Nighttime: 9 Most Beautiful Sights in Disney After Dark

In addition to the beauty of many daytime sights at Walt Disney World, nighttime at Disney can be a feast for the eyes. Here is a list of 9 magnificent marvels guaranteed to wow you after the sun sets.

This area of Disney is reminiscent of turn-of-the-century boardwalk areas on the east coast of the United States. It includes a dance hall, arcades, shopping, dining, and street performers. Although Boardwalk is charming at any time of the day, its true grandeur emerges after sundown. Take a leisurely stroll around the quarter-mile stretch of seaside architecture, or board the FriendShip at any Crescent Lake Resort and view the beautiful lights from afar.

Wishes is a 12 minute fireworks display that takes place most nights in the sky above Cinderella’s castle at the Magic Kingdom. The fireworks are synchronized to popular Disney music and enhanced by a bevy of colors that seem to envelope the castle during the show. Even Tinker Bell makes an appearance as she flies overhead!

IllumiNations is a nightly experience at the World Showcase Lagoon in Epcot. This amazing show combines fireworks, lasers, moving lights, floating fountains, and a 350,000-pound video display “Earth Globe” as the centerpiece. All of the countries are illuminated at certain points during the show, with the best viewing from the lagoon fence outside the Canada Pavilion. It is not to be missed!

Fantasmic! takes place on select nights at Hollywood Studios in the Hollywood Hills Amphitheater. This 30 minute show combines laser lights, pyrotechnics, and some spectacular special effects including Disney animation projected on walls of mist. Though the show can be somewhat intense for young children, it is amazing display of Disney Magic and a must-do for visitors to this park. This 20-minute parade in the Magic Kingdom is comprised of a series of floats festooned with thousands of multi-colored lights. Many of the floats are ridden by beloved Disney characters, including Alice, Tinker Bell, and the Dwarfs. Young children are guaranteed to be dazzled by this twinkling spectacle.

This is similar to the Main Street Electrical Parade, but takes place in the Seven Seas Lagoon and Bay Lake. There are 14 floats, many representing sea creatures and patriotic elements. The pageant is viewable from Magic Kingdom resorts, Fort Wilderness, and the area directly outside the Magic Kingdom main gates. For an especially spectacular view, watch the pageant from the beach at the Polynesian. From that vantage, the Magic Kingdom will serve as the backdrop.

Each year at Epcot from late November through late December, the Candlelight Processional awes guests with a beautiful retelling of the story of Christmas through music and narration. A mass choir, dressed and arranged to resemble a Christmas tree, is accompanied by a 50-piece orchestra and celebrity guest as they sing traditional Christmas hymns. Past celebrities have included Neil Patrick Harris, Whoopi Goldberg, and Trace Adkins. This is a beautiful exhibition of Christmas spirit and not to be missed if you are visiting Walt Disney World during the holiday season.

This is a display of Christmas lights unlike anything you’ve ever seen. Millions of lights adorn every single building and tree on the Streets of America in Hollywood Studios. Every 10 minutes, the lights are synchronized to flash and dance to traditional holiday tunes while “snow” falls over the entire scene. Words cannot adequately describe this amazing sight. 1. Cinderella’s Castle during the Christmas season

The castle decorated for the Christmas holiday is truly a sight to behold. 200,000 LED lights attached to fisherman’s net transform the Castle into a shimmering spectacle. The Castle also appears to change color behind the twinkling lights. From a distance the castle appears to glisten like a candy-coated confection. For the true Disney enthusiast, there could not be a more beautiful scene.

What do you love to view in Disney after dark? Leave us a comment below!