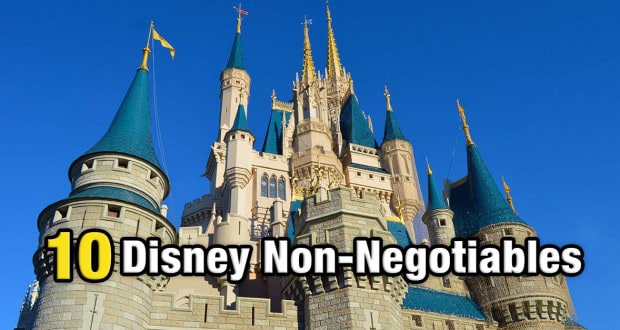 Disney Non-Negotiables: 10 Walt Disney World Experiences You Must Have

For many people, going to Disney World is a once in a lifetime experience. For others, it is the vacation they look forward to every year. No matter if this is your first or fiftieth Walt Disney World trip, there are some things you just have to do when you are there. Here is a list of 9 Walt Disney World experiences you must have.

The monorail is a Walt Disney World icon, and no trip to Disney is complete without it! If you are staying in a resort on the monorail line, try riding it to the Magic Kingdom instead of taking the boat or bus. If you aren’t staying on a monorail line, consider doing a tour of the resorts that are! You can visit the Grand Floridian, the Polynesian, and the Contemporary all in one shot. It’s a great way to spend the afternoon when you are breaking from the parks. Check out “15 Impressive Facts About Disney’s Monorail System.”

8. Picture in front of Cinderella Castle

Regardless of the amount of times I have been to Disney, one question I always hear is, “Did you take a picture in front of the castle?!” Cinderella’s castle isn’t just any Disney icon, but it is THE Disney icon. When you are looking at someone’s photo album of their Disney trip, one of the first pictures they show you is of them standing in front of the castle. You don’t want to be that guy without having a picture taken there! There are a lot of different photo opportunities in front of the castle, so don’t forget to take yours!

No trip to Disney is complete without riding the famous Mountain range: Space Mountain, Splash Mountain, and Big Thunder Mountain all located in the Magic Kingdom. If you are a true mountaineer, you will also take the plunge on Expedition Everest where you go on the epic search for the mysterious Yeti. Each of these mountain coasters will be sure to get your adrenaline pumping and can make for great stories when you head back home.

While the mountains are certainly a classic set of rides in Disney World, there is one ride that just by its title alone, has woven itself into the fabric of Disney World. The Twilight Zone Tower of Terror is one of those rides where people don’t have to know what the attraction itself entails, but the name alone is enough to conjure a picture in your mind on what it is about. It is one of the most classic images of Hollywood Studios and remains one of the most popular attractions in the whole resort. It is a non-negotiable, at least one time in your life!

The Lion King Show located in Animal Kingdom captures the essence of a Disney classic with a new spin on it. This show features acrobats, cool effects, and of course lots of singing and dancing. This show is unique as far as other Disney shows are concerned. Whereas most shows in Disney World focus simply on retelling the story of the movie on which they are based, The Lion King instead aims to capture the raw emotions behind the movie. In most shows you feel like a passive observer, but in the Lion King you are an active participator in the festivities. Taking a trip to Disney just isn’t complete without getting all of the feels in this classic show.

Kilimanjaro Safaris located in Animal Kingdom is a great attraction for everyone young and old. Where else can you go on a safari ride and see crocodiles from the Nile, endangered rhinos or a lion dozing in the sun? This is more than your typical “zoo” experience. You are not looking at these animals through cages but rather are driving through them out in the open. This is something that you must do when vacationing in Disney.

3. Watch one of the nighttime shows

There is no better way to end your night in the parks than watching one of the magical nighttime shows. There are currently three shows that just can’t be missed – Illuminations in Epcot, Fantasmic in Hollywood Studios, and Wishes in Magic Kingdom. Each of these shows incorporate the use of lasers, projections, and of course fireworks! These shows are the epitome of Disney magic. Between the use of music, lighting and imagery, each of these shows is meticulously designed to appeal to your Disney side. It is the perfect and really the only way to end your day at Disney world. Check out “5 Must See Night Time Shows At Disney World.”

When in Disney, it is hard to get around not eating something that is Mickey shaped. One of the favorite classic Mickey-shaped foods is the Mickey Ice Cream Bar! They are much like any ice cream bar that you can have anywhere, but there is just something that makes it all so magically tasty when eating it in Disney. What better treat is there to beat that Florida heat than with an ice cream bar?!

No trip to Disney is complete without meeting Mickey and Minnie. Everywhere in the world, if you said the names Mickey and Minnie Mouse, everyone would know who you are talking about, regardless of language barriers. There are so many opportunities to meet them in each of the parks. Do yourself a favor and fulfill your childhood dream of meeting them! They are the foundation of what Disney is today. And as Walt says, “It was all started by a mouse.”

Non-Negotiables 2015-07-03
Emily
Previous: 9 Rookie Planning Mistakes That can Totally Screw Up Your Disney Trip
Next: Can You Recognize The Disney Movie By The Final Scene?

Emily is a full time student pursuing her degree in Creative Writing and also works full time. She always has Disney on the brain, and as a DVC member she is always planning her next trip! She looks forward to meeting new people and sharing her first hand experiences with everyone!

Yes! You Can Save Money On Your Next Trip To Disney World – Here’s How! 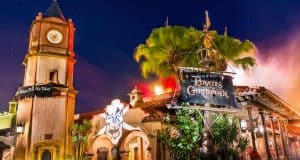 13 Coolest Ride Queues on A Hot Day At Magic Kingdom 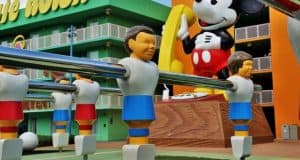