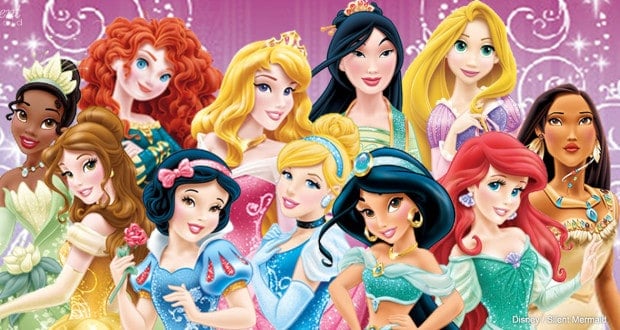 We all love Disney Princesses and they’re all so unique! Here are a few fun facts about the inspiration and creation of some of the world’s most captivating leading ladies.

1. Mulan’s story is based on an ancient Chinese legend of a female warrior named Hua Mulan from a poem titled “The Ballad of Mulan.”

2. Snow White is supposed to be 14 years old. She’s the youngest Disney Princess.

3. Which Disney Princesses are left-handed? Mulan and Tiana.

4. Belle is the only Disney Princess with hazel eyes.

5. Belle’s looks are inspired by Judy Garland in The Wizard of Oz, and Julie Andrews in The Sound of Music.

6. Mulan is the first Disney leading lady that isn’t actually a princess. Disney Princesses are either royal by birth, or marry into royalty.

7. Pocahontas is the only princess based on a real person.

8. Rapunzel’s eyes are the biggest compared to her Disney Princess counterparts.

9. Tiana is the only Disney Princess with dimples.

10. Mulan and Jasmine’s singing voices are performed by the Lea Salonga.

13. Snow White is the only Disney Princess to receive a star on the Hollywood Walk of Fame.

14. Alyssa Milano’s face was used as inspiration for Ariel’s look.

15. A number of Ariel’s mannerisms came from watching the improvisation of her live-action model.

16. Merida has more than 1,500 individually illustrated, red strands that generate about 111,000 total hairs.

17. Jasmine’s character is based on the princess from an Arabic folktale called One Thousand and One Nights.

18. Rapunzel and Snow White are both from Bavaria.

20. Princess Aurora is the first Disney Princess to have violet eyes.

21. Kristin Chenoweth and Reese Witherspoon were both cast as the voice of Rapunzel, but they both dropped out. The role then went to Mandy Moore.

22. Reese Witherspoon was also originally cast as the voice of Merida… but Kelly MacDonald ended up doing the job. I can’t imagine Reese doing a Scottish accent!

23. The transformation scene where Cinderella’s dress goes from rags to a ball gown — was one of Walt’s favorite pieces of animation.

24. Princess Aurora had only 18 minutes of screen time and 18 lines of dialogue in the film, making her the quietest Disney Princess.

25. After auditioning more than 150 girls for the voice of Snow White, the part went to 20-year-old Adriana Caselotti. Her father, a singing coach, was helping Disney find a voice talent. Adriana overheard her father’s phone conversation and began talking in the background to prove she the perfect voice and she ended up getting the part.

26. Pocahontas is the only Disney Princess with a tattoo. You go girl!

27. In earlier drafts of the film, Cinderella originally had a pet turtle named Clarissa. Seriously?

28. Jasmine’s looks actually helped influence the design of Aladdin. Earlier sketches showed depicted Aladdin as much younger. But once Jasmine was designed, it was thought she wouldn’t be attracted to someone who looked like a scruffy kid.

29. Belle, was the first Disney Princess with more character depth. Her more cerebral character was partly inspired by Katharine Hepburn’s portrayal of Jo in the 1933 film version of Little Women.

30. Merida is the only princess to have brothers.

31. Linda Woolverton the screenwriter for Beauty and the Beast, wrote in Belle’s “little wisp of hair that keeps falling in her face” — showing that Belle wasn’t perfect.

32. Disney shot all of Cinderella in live-action to use it as a guide for animation.

35. Ilene Woods, a radio singer and personality, didn’t actually know she was auditioning for the role of Cinderella. She recorded a couple songs for the film as demos, as a favor to the songwriters with whom she was friends. When Walt heard the recordings, he chose her over the 400 other girls who had auditioned for the role.

36. Ariel can be seen hanging out in the mermaid lagoon in Peter Pan’s Flight in Disneyland.

37. Jasmine is the second-youngest princess. She’s 15, one year older than Snow White. Talk about child bride.

38. Belle is the only person in her town wearing blue, symbolizing her position as an outsider. Later, you see the Beast wearing blue as well.

39. Mulan was redesigned and this caused a significant upset because it looked as if her skin was lightened. Similar claims were made for Pocahontas and Jasmine.

40. Disney’s Pocahontas is 18 in the film but in real life, Pocahontas met John Smith at a much younger age. Roy Disney said that it made a more dramatic telling of the story.

41. Glen Keane, the creator of Rapunzel, was inspired by his daughter, who, as a girl, always wanted to paint her bedroom walls. By the time Keane started on Rapunzel, his daughter had become an accomplished painter and was hired to create the look of Rapunzel’s room. SURPRISE! Want to see how many of these facts you remembered? Take this quiz. Are you a Disney Princess Expert? Answer a few questions and find out!