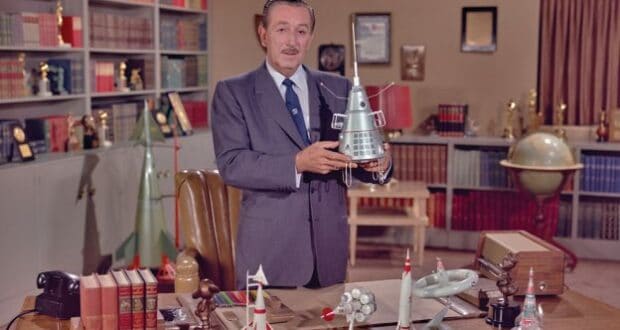 In this exciting age when everyone seems to be talking about the future possibilities of space travel, there is much speculation on what we will discover when we visit other worlds.” —Walt Disney

Disney and space? Most of us Disney fans may think Disney and think Space Mountain and Mission: SPACE… but Walt Disney’s impact on the U.S. Space Program stemmed even further. DisneyParksBlog shares an incredible article below explaining how Disney impacted the space program and how we are still experiencing Walt’s love for space today.

Disney culture is filled with interesting coincidences, inspirations, and connections—one of the most remarkable and surprising is the influence of Walt Disney himself on the U.S. space program. That stimulus certainly raised public awareness and enthusiasm for space exploration, which in turn helped gain support for the formation of NASA and its Project Mercury, as seen in the new National Geographic scripted series “The Right Stuff,” premiering today on Disney+. But Walt’s impact went even further.

The origins of this association came from Walt’s new venture into television in 1954, and the concurrent development of Disneyland. The realm of “tomorrow” was a part of each, and in both cases, the  futuristic notions and projects lagged behind the familiar subjects. “Walt was all set with animated material for Fantasyland, he had historical Frontierland stuff like Davy Crockett and Pecos Bill, and the True-Life Adventures films…the Disney film archives were filled with these things…but he had nothing for Tomorrowland,” Disney Legend Ward Kimball told E Ticket Magazine in 1996.

Kimball had seen a popular series of Collier’s magazine articles on space that began publication in 1952. “These articles were by the foremost space experts of the time (Willy Ley, Heinz Haber, Werner von Braun and illustrator Chesley Bonestell) and I had been very interested in them,” Kimball said. “Walt came back later and said, ‘This is the way to go…this is not science fiction, this is ‘science factual’…we know these things, so let’s get Von Braun and the others out here!’”

The result was a hugely popular and highly influential series of TV hours. Kimball co-wrote, produced, directed, and appeared in: “Man in Space,” airing on March 9, 1955, “Man and the Moon,” airing on December 28, 1955, and “Mars and Beyond,” aired on December 4, 1957. “The general public didn’t grasp the possibility of space travel,” Kimball said. “They had no conception of what was involved…even with three shows we weren’t able to do it as thoroughly as we wanted.”

The series of programs created a cultural phenomenon with the public, and its clear presentation of complex subject matter piqued the interest of another influential viewer. “That’s why [President] Eisenhower, when he happened to see our ‘Man in Space’ program, was absorbed by it,” Kimball said. “He realized that he had generals in the Pentagon who didn’t understand or accept these ideas. At first, the military did not support America’s program for space exploration. He flew them all in, and for two weeks, he screened our program for his top Generals. Walt was very proud when Eisenhower called him about the program, and was so glad to accommodate him. The call came into the Studio, and I guess at first the switchboard didn’t believe it was the President of the United States!”

Kimball realized that Walt Disney had been a key influence in the creation of the U.S. space program. “It was a high point for me,” Kimball said, “because I felt I was participating and being part of the future. I was rubbing elbows with the people who were going to take us to the moon, and to Mars, and beyond to other planets. This was an elixir that one couldn’t deny.”

The connection of Disney and space has remained consistent and strong over the decades. Almost every concept rendering of Tomorrowland at Disneyland contained a majestic rocket ship, and attractions such as Flight to the Moon and its successor, Mission to Mars, were popular at Disneyland and Walt Disney World. The romance and excitement of space created the iconic thrill ride Space Mountain, a staple at most Magic Kingdom-style parks worldwide; and from its very origins, EPCOT certainly had its eye on the future and the technologies created for, and derived from space exploration. Mission: SPACE opened at EPCOT in 2003, simulating astronaut training experiences on two different space missions, the thrilling and intense “Orange Mission” and the gentler and more family-friendly “Green Mission.”

One of the most interesting moments in the confluence of Disney and the U.S. space program was the appearance of original Mercury Seven astronauts (subjects of the National Geographic series “The Right Stuff” on Disney+), Scott Carpenter and Gordon Cooper, along with Apollo 15 astronaut Jim Irwin, at the opening of Space Mountain at Walt Disney World in 1975. An even larger reunion of the Mercury Seven—Carpenter, Cooper, John Glenn, Wally Schirra, Alan Shepard, Donald “Deke” Slayton, and Betty Grissom (widow of Virgil I. “Gus” Grissom)—took place two years later at the Disneyland Space Mountain opening.

One wonders if they were told, or were aware of, the fact that they were not just celebrating “space” at these events, but by extension, celebrating the influential showman whose vision and work had played a nascent part in their careers and fame. Their intertwined histories created, as “The Right Stuff” celebrates, “an aspirational story about how ordinary human beings can achieve the extraordinary.”

Today, Disney+ will premiere “The Right Stuff,” National Geographic’s new scripted series based on the iconic bestseller by Tom Wolfe. Produced by Leonardo DiCaprio’s Appian Way and Warner Bros. Television, “The Right Stuff” is an inspirational look at the early days of the U.S. space program, and the incredible story of America’s first astronauts, the Mercury Seven. Walt Disney’s original 1950s Disneyland series TV shows “Man in Space” and “Mars and Beyond” are also available on Disney+.

2020-10-10
Jamie Sylvester
Previous: New “T is for Together with Family” line on ShopDisney
Next: Furloughed Disney Cast Members Launch “Diversify The Classroom”