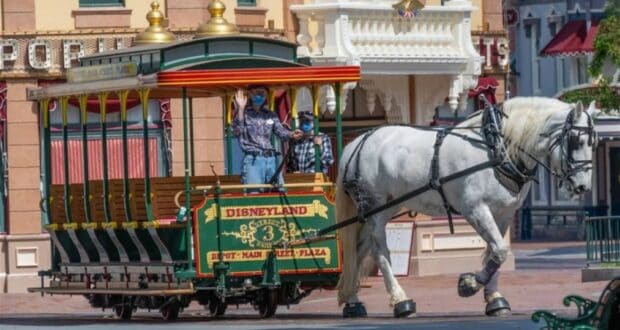 It is slowly but surely looking better and better each day for Disneyland’s grand reopening. Disney just announced they plan to reopen on April 30! It is also being reported that the familiar clip-clop sound of Disney horses has returned!

As reported by OCRegister: “The familiar clip-clop sound of Disneyland’s beloved draft horses are once again echoing off the facades of the Victorian-style buildings lining Main Street U.S.A. as the Anaheim theme park prepares for an April reopening following a year-long coronavirus closure. The Disneyland draft horses that are expected to ferry Disney characters along the entry promenade have been taking practice runs pulling the park’s vintage horse-drawn trolleys.”

“Disneyland horses are considered cast members, Disney-speak for employees. Each of the horses has its own oversize cast member name tag in the tack room of Disneyland’s Circle D Ranch in Norco. The Home of the Happiest Horses on Earth offers spacious quarters for the working animals as well as storage space for stage coaches and carriages used in the theme park.”

While California theme parks, including Disneyland, are allowed to reopen according to Gov. Newsom as early as April 1, Disney CEO, Bob Chapek, noted that recalling and retraining Cast Members takes time – hence the April 30 reopening date. We simply CAN’T WAIT!