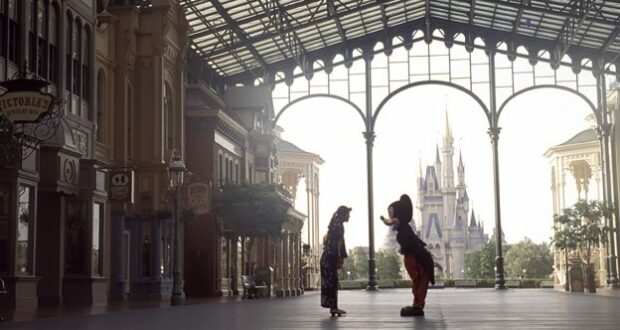 Disney’s Behind the Camera Series: Dreaming Up New Ideas at Tokyo Disneyland

Who’s ready for another look behind the camera with DisneyParksBlog’s “Behind the Camera Series”? This captivating photo was captured David Roark, Manager of Photography, Yellow Shoes Creative Group. Read his story below as he shares the magic behind this impressive photo!

I don’t like to repeat myself when it comes to photography – if I find a cool angle on a shot, tomorrow I want to find a different one. This can be a real challenge sometimes, though, now that I’ve been a Disney photographer for nearly 40 years! But I’m always in search of new locations and perspectives that showcase the grandeur and magic of Disney destinations around the world.

This little philosophy of mine was the primary reason I was invited to Tokyo Disneyland in early 1989. The park had been open for a few years by that point and the team over there was looking for a fresh perspective on how to photograph the resort.

The photo you see here was taken during that trip. My idea was a classic “East meets West” visual, with Mickey Mouse greeting a young Japanese woman in a traditional kimono. While this image may appear clean and simplistic in form, it took a lot of preparation to set up – Tokyo Disneyland is one of the most popular theme parks in the world, and we needed its World Bazaar area (its version of Main Street, U.S.A.) completely clear of guests and cast members. It took a lot of discussions, but it was also a good lesson for my fellow photographers in Tokyo for turning dream photos into reality.

I made some great friendships on that trip, and I still remain in touch with members of that team to this day, more than three decades later. We frequently talk about new technologies in our field and share advice on one another’s assignments. And it all started with this photo, which has always been one of my favorites. Simple, elegant and uniquely Tokyo Disneyland!