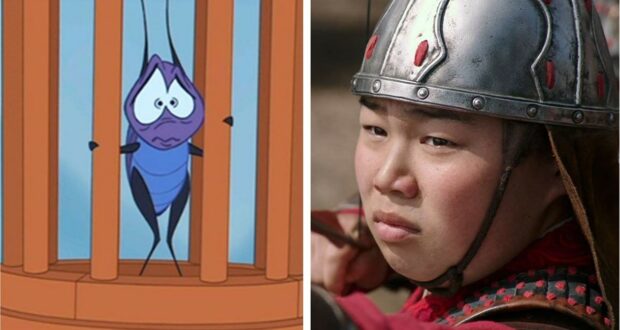 Have you streamed Disney’s live-action Mulan yet? Available on Disney+ with Premier Access, we absolutely loved the movie! We’re big fans of the original animated Mulan film, but were excited to see a new spin on the story with the live-action version. We were however bummed to be losing two fun, comic relief characters in the live-action version, including Mushu and Cricket.

This duo really takes the animated Mulan to the next level! If you watched the live-action Mulan, did you catch it has its own version of the lucky Cricket?!

As shared by ComicBook.com: “In this new version of the film, Cricket is a human being, not an insect, but he’s just as lucky as before. Cricket is one of the young soldiers that befriends Mulan once she’s in the army and posing as a man. He’s played by actor Jun Yu. When he first introduces himself to the other soldiers, he explains that his mother believes him to be good luck. “I’m cricket,” he says. “My mother says I was born under an auspicious moon. That’s why, my mother says, I’m a good luck charm.”

“In the original film, Mulan’s grandmother gives her a lucky cricket when she is going to meet the matchmaker. The charm doesn’t exactly work the way it’s intended, but Cricket proves throughout the movie that he is, in fact, one lucky bug.”

Watch the live-action Mulan and you’ll see the fun element of humor this new version Cricket brings to the screen!