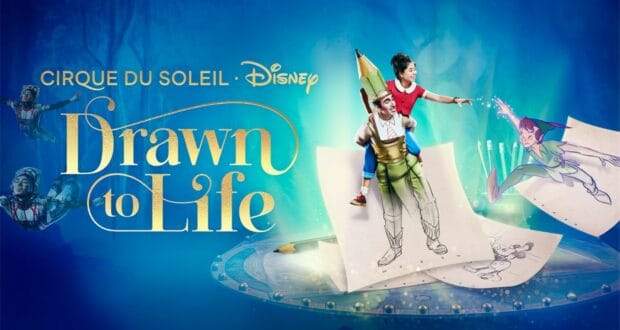 Drawn to Life is the all-new live show presented by Cirque du Soleil and Disney, set to be located at West Side in Disney Springs. However, following the emergence of this year’s viral crisis, sadly the show has been postponed until next year. But the upside means we have even more to look forward to, so let’s take a look at why you’re going to fall in love with Drawn to Life.

Drawn to Life is described as a ‘creative tour de force’ and a ‘love letter to the art of Disney animation’, so you can only imagine what’s in store. As the first collaboration between both forces, the show is set to seamlessly blend the spellbinding acrobatics of Cirque du Soleil and Disney’s wonderful world of animation, and bring it all bursting to life on stage in ways never before seen.

With shows and events to boot, a place like Disney World can leave you feeling truly inspired. And Drawn to Life is no exception. Partly because it celebrates the wonder of imagination, and partly because the story is widely relatable. In short, a young girl inherits a gift from her father, and what follows is an emotional journey that combines her childhood dreams with the possibilities of her future.

To no surprise, the story is engaging and moving. Its beats perhaps follow some traditional tropes from other tales as old as time, in that a child undertakes a quest of extraordinary proportions (our lead character is guided by a magical pencil – pretty neat!), all the while she explores a world of imagination and animation. But it’s told in a way that’s both down to earth and mesmerizing at the same time.

There might not be a better year to spend some quality time with your family than 2021. For generations, Disney has brought loved ones closer together, and following this year’s distressing viral crisis, the strengthening of such bonds will be more important than ever. Be sure to share this once-in-a-lifetime experience with your loved ones, and leave together with long-lasting memories.

Cirque du Soleil has been around for many years, and has wowed audiences since breaking new ground in the 80s. To combine its mastery with that of Disney’s absurdly talented Imagineers, is something that can only be described as rare where the resort is concerned. In other words, the addition of a show like Drawn to Life at Disney World is nothing short of golden.

5. It Puts Disney Springs On The Map

Yes, we know Disney Springs is already on the map, but it’s never a bad thing for the resort’s electrifying entertainment district to welcome a new event. Another plus is that some guests still don’t feel comfortable venturing into the parks just yet (understandably so), so having an event of such gravitas at the resort’s doorstep will undoubtedly appease plenty for the foreseeable future.

Drawn to Life boasts a vast array of talent to behold. From breath-taking and ground-breaking visuals in the form of classic, colour-drenched Disney animation to acrobatic choreography performed with such elegance and precision, and made so iconic by Cirque du Soleil, this is one show that simply won’t let you forget long after the curtains roll.

The stage won’t just be alive with actors, animation and special effects – it will also be alive with the sound of music! But don’t expect nothing but tunes you’re all too familiar with – the Drawn to Life score will be an original piece helmed by the best composers. The good news is they’ll be inspired by some of the classics, so perhaps you can expect to hear some rifts as old as time.

Let’s face it – we’re all in need of something to lift our spirits. And this new bare necessity isn’t going to change as we leave this turbulent year behind and head into 2021. In fact, we may need it then more than ever. But what better way to elevate one’s soul than to enjoy something so otherworldly, and so borderline ethereal in its elegance and wonder. That’s where Drawn to Life comes in.

Disney World is no stranger to live entertainment, whether it’s an illuminating night-time event, a whimsical parade, or a larger-than-life stage show that celebrates a particular fictional world or movie. Drawn to Life, however, is so unique in its presentation, bringing together two very different worlds, that it really needs to be seen to be believed.

Drawn to Life tickets are available beginning February 10, 2021 and range from $79 – $179. Tickets can be purchased here. Take note that this event requires separate admission, and that advanced ticket purchase is highly encouraged. In the meantime, if you’re planning on visiting Disney World, be sure to check out the official website for guidance regarding the current viral crisis.