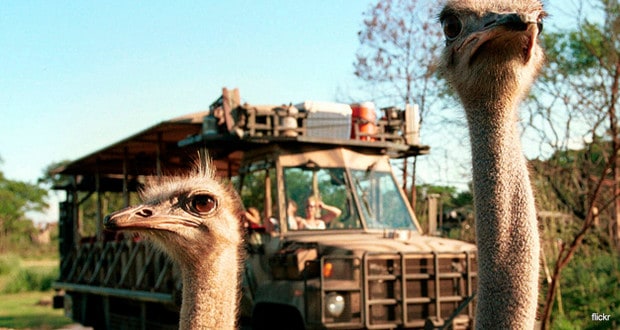 Do You Know What’s Really Going On At Kilimanjaro Safaris? Here Are 8 Fun Behind The Scenes Facts!

Walt Disney had a long-held fascination with animals and wanted to do something with live animals at Disneyland. It sounded good in theory but reality was different. Not until many years after his death did Disney decide to go forward with live animals in their theme parks. The Animal Kingdom opened in 1998 at Walt Disney World with much fanfare and quite a bit of controversy. Disney was adamant that its new theme park was NOT a zoo. The premier attraction was Kilimanjaro Safaris, where guests can witness live animals roaming free in a natural environment. To allow guests to enter the open savannah, Disney went to extraordinary efforts to give safe access. Here are 8 Fun Behind the Scenes Facts you may not know about Kilimanjaro Safaris.

1) The Vehicles – Guests board large open-air jeep-like vehicles with several rows of benches. Contrary to what many guests believe, these vehicles are free-moving. They don’t simply cycle around on a track. The animals here are free roaming. Drivers will often need to swerve to one side of the road or another to scoot past a stubborn giraffe. While they can’t leave the road entirely, there’s enough wiggle room to help them navigate the savannah safely. Drivers must maintain a safe and proper distance from the trucks ahead of them while also watching for animals and talking to guests about what they’re seeing. Every trip is different!

2) The Lions Can’t Get You – If you’re lucky, you might spot a lion lounging on a rock. Don’t worry though, he won’t be able to have you for lunch! Unseen by guests is an 18 foot deep, 21 foot wide hidden moat separating them from you. Likely, your driver will stop your vehicle briefly so you can snap a few pictures to share with family and friends.

3) Bribery – Many guests plan to ride Kilimanjaro Safaris in the morning to see the animals at their most active. The fact is that the animal experts use lots of tricks to get the animals out and about throughout the day. One of the methods they use is to place a plant called browse in concrete feeders out in the open areas. The feeders are camouflaged as broken tree limbs and stumps so you’ll never really even notice. Hunger is a great motivator!

4) The Lions Are Cool – The lions originally had a hard time adjusting to the Florida humidity (Don’t we all?). The imagineers decided to install air conditioning around the lions’ promontory to make it easier for them and presumably to encourage them to get out and see people in the safari vehicles as well.

6) Segregation – On a real savanna, the animals co-mingle, with sometimes unpleasant results for the viewer, but of course that’s not the way it works at Animal Kingdom. Disney uses various methods such as camouflaged fences, impassable bridges and barriers in the water to keep the species all separated. Disney works hard to keep these out of view to guests so that it all seems connected even though each species is segregated.

7) Upside Down – It actually does feel like you’re in Africa when you look around.  There’s a large variety of animals on the savannah including elephants, lions, giraffes, rhinos, and hippos.  There’s even these crazy looking African trees called the baobab or “upside down” tree that goes most of the year without leaves so it looks like a giant upside down tree root. *Spoiler alert! The iconic Baobab trees are creations of the Disney Imagineers. Real Baobabs of this size would have to be more than a thousand years old and practically impossible to transplant.