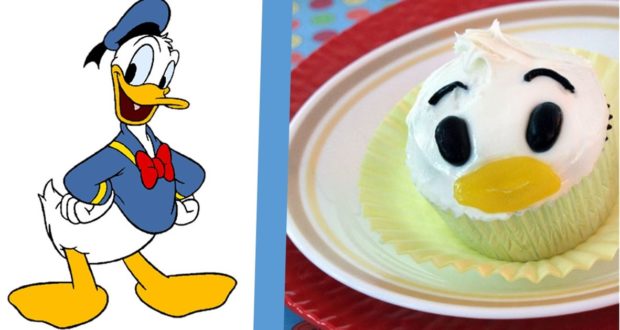 Even Donald Duck has a sweet side! And this cupcake recipe from Family.Disney.com is making it all the sweeter with these Donald-inspired Just Ducky Cupcakes. We all know Donald Duck is #1… we’re sure these cupcakes will be #1 in taste! Happy baking!

1. Frost the cupcakes, using the knife to pull the frosting up into a couple feathery peaks at the top of the head.

2. For a duck bill, slice a yellow Swedish Fish candy in half lengthwise. Then press the two halves into the frosting, separating them slightly, at the very edge of the cupcake top (opposite the feathery frosting peaks).

3. For eyes, press two black jellybeans into the frosting. Use the black decorating icing to pipe on curved eyebrows about 3/8 inch above the eyes.