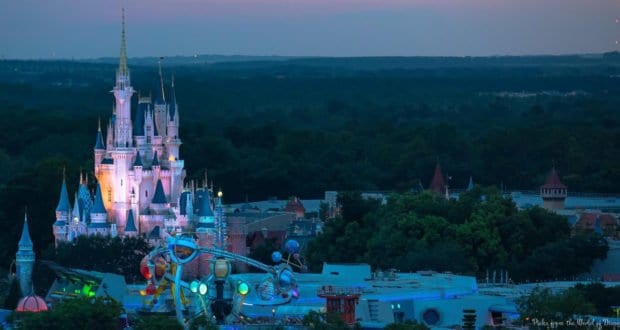 We can all understand the importance of getting that perfect shot, especially when visiting the most magical place on earth. Well, one man decided he’d use his drone piloting skills to capture the empty Magic Kingdom in all it’s glory. BUT… he ended up with a trespass warning!

Orlando Sentinel reported the news today of an incident that took place on May 20. Obviously, Disney Security is still doing their jobs well as they spotted a drone about the size of a frisbee flying 100 feet from Cinderella Castle.

At an apartment complex close to Magic Kingdom, a 40-year-old, Minneola resident was operating the drone. Apparently we is an experience drone pilot – taking jobs for a Lifetime movie and drone footage for Universal’s Volcano Bay.

Despite the drone pilot’s excitement to capture the empty Magic Kingdom, an off-duty Orange County deputy caught the man who is not being named because it wasn’t a charged crime.

“I asked him why he was in a parking lot of an apartment complex he did not live in and standing behind trees out of view from Reams Road, he did not have a clear answer to the question,” the deputy said in the May 20 incident report. The man was issued a trespass warning.

The drone pilot said “I didn’t think I was doing anything wrong.” But, as you may know, there are Walt Disney World rules against drones and the FAA enforces a no-fly zone for the property. Nothing can fly below 3,000 feet and within 3 miles of Walt Disney World.

So, do we get a chance to see the footage? Nope. The drone pilot shares, “Obviously I can’t post them. I had to tell Disney I would delete them as a favor,” he said. “I don’t want to get into more trouble with Disney.”