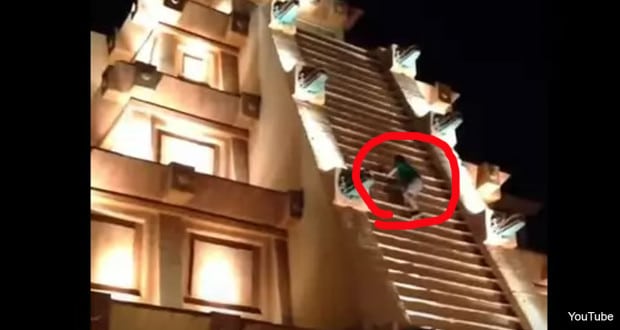 A drunken man climbed the outside of the Mexico Pavilion during Epcot’s Food & Wine Festival.
A Epcot park guest shot a video of the incident and posted it on YouTube. Astonishingly, the man had enough presence of mind to climb back down the pyramid and was able to elude security staff.

Walt Disney World opened on October 1, 1971, and since that time there have been numerous instances of people trying their best to outwit and outmaneuver the rules and regulations that ensure a safe and magical experience for all. It has become almost a “rite of passage” to become the first person to spend the night at one of the theme Parks, or crash a private event, or even sneak into the underground Utilidors. Some have actually managed to access the underground tunnels and videotaped their visit, then posted it on Youtube, but if caught, you may be banned from Walt Disney World for life, a high price to pay for being nosey! I have highlighted some of these wild attempts or just as the title says, ten shocking things people have done at Walt Disney World since 1971.

10. A Family Affair — This incident occurred at King Stefan’s Dining Hall in Cinderella’s Castle. A family of four were seated, then halfway through the dinner, the husband stood up, tapped his glass for attention, then proceeded to announce that his wife of 15 years had been cheating on him for over a year. He then motioned for his children, paid the waitress, and left his wife crying at the table.

9. Rest In Peace, But Not Here — This event actually happened at two different attractions, the Haunted Mansion, and Pirates of the Caribbean. Guests daringly scattered their loved ones’ ashes in a way that they believed would not be noticed, but since infrared cameras are positioned in several different places on all the rides, the guilty parties were caught, and although, the offense did not merit lifetime banishment, the guests were admonished and informed of how their actions caused the ride to be shut down and completely cleaned before it could be re-opened. If you spread ashes into the ocean, lake, pond, etc., or even into the air, at least you can observe the ritual. When you spread ashes at an attraction at WDW, you never see where they go, and eventually they are swept away or emptied into a sewer. This is not a very sacred way to go!

8. Walt Disney World Is Family Friendly — Walt Disney once said at the opening of Disneyland in July, 1955, and on that day, Walt Disney uttered these words, “To all who come to this happy place; welcome”. I am sure he would have made a similar speech at the opening of Walt Disney World in 1971. Unfortunately, some strange people cannot be satisfied with the joy and magic of Disney World. They have to tempt fate and go for a “shocker” by exposing themselves during the automatic photography provided on most of the major attractions. There are cast members who monitor all the rides for unruly guest behavior, and guests who participate in obscene gestures or actions while the picture is taken. These photographs are immediately deleted, and the guests are usually asked to leave, but seldom banned forever. When they find out no one is going to ever see their photograph, hopefully, they will give up their indecent behavior.

7. Please Remain Seated At All Times — Would you believe that some ignorant guests think it is fun to try to stand while on an attraction that does not have a bar to hold them in place. These incidents usually occur on rides like Pirates of the Caribbean, It’s A Small World, the People Mover, etc. It is amazing that anyone would be so reckless. When a rider becomes a daredevil, the cast member who is monitoring the cameras immediately announces over the PA system, for all guests to “please remain seated at all times”. I have actually been on “Pirates of the Caribbean” once when a teenager trying to show off, stood up, nearly fell over, and then laughed. When the announcement came over the loudspeaker, there was more than one guest who voiced their appreciation for the announcer and their contempt for the “showoff”. He sat quietly the rest of the ride and exited the boat rather quickly, never to be heard from again, at least not on this ride.

6. Bad Parenting I — A couple was trying to ride Space Mountain with a black duffel bag, when a cast member heard a sound coming from the bag. He asked them to open the bag, and when they refused, security was called, and they were forced to open the bag. Inside the bag, unbelievably, was their 6-month old baby. I don’t know for sure what happened to them, but hopefully, they were charged with child endangerment. What a couple of “losers”!

5. Bad Parenting II — Another case of bad parenting occurred, again, on Space Mountain. A cast member, on their way to take a break, noticed a down-syndrome child waiting in the back hallway. He assumed he was waiting for his family to finish their ride. After his break, he noticed the child was still there, so he took him to the unload area to see if his family was there. They were no where to be found. After calling managers and coordinators conducting a thorough search of Tomorrowland, they finally found his family exiting the Buzz Lightyear Space Ranger Spin ride. They just left the child at Space Mountain! Their excuse was so ridiculous; each one claimed that they thought he was with the other parent. This sounds like child neglect to me. Shame on them both, and I hope they will be instructed to take parenting classes!

4. How To Get Ahead (in line) — This story even made it to the national news, when reports began coming out of Walt Disney World about guests hiring disabled persons to walk around with them at one of the WDW theme parks, so they could go to the first of the line. After a series of interviews and observations, it was verified that this activity was occurring quite often. Sadly, Walt Disney World executives made the decision to suspend the practice of allowing disabled people and their parties to go to the front of the line.

3. No Weapons, Please — A guest was shocked to find a loaded pistol as she was exiting the Dinosaur ride. The gun was reported to the ride attendant, who immediately reported turned it over to the proper authorities. When the owner of the gun was contacted, they stated that they were unaware of Disney’s policy against weapons and had a concealed weapon permit. I hope this guest was also told that his ignorance of the policy does not excuse the fact that he brought a loaded weapon into a theme park filled with families. His excuse blows my mind! I hope this not lead to metal detectors and body scans before entering the Parks!

2. Hostage Situation — A waiter and a child were held hostage by the child’s father in a hotel room at the Disney’s Boardwalk Resort. The incident was caused by domestic issues. During the hostage situation, other guests were evacuated and given alternative accommodations in the resort. The man released the hostages and handed himself over to authorities. It seems even the most magical place on earth is not immune from the problems of the world around us. But at least this situation ended without any injuries!

1. Foolishness Exists Everywhere, Even At Walt Disney World — A guest of Walt Disney World witnessed a young man with a pair of scissors come up behind a little girl holding a Mickey Mouse balloon and cut the string, releasing her balloon into the air. Of course, the jokester took off quickly with his friends and disappeared into the crowd. The little girl was very upset, as were her parents. The incident was reported to authorities, but the perpetrator was never caught. As for the little girl, she was given a new Mickey Mouse balloon and she and her parents were given several fast passes to help keep the Disney magic alive!