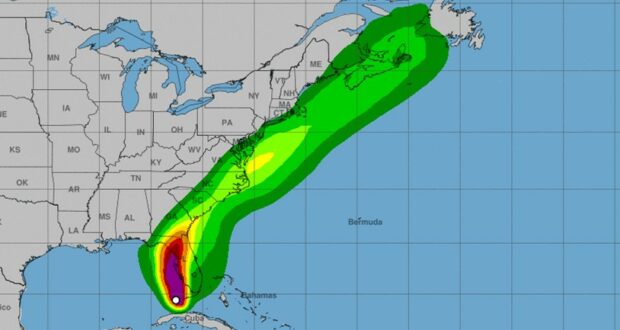 Ok Florida visitors and residents, Elsa is on her way! If you’re headed to Walt Disney World you’ll want to take note that, Tropical Storm Elsa is expected to make landfall in Florida the morning of Wednesday (June 7). Unfortunately, she’s slowly strengthening and is now forecast to become a hurricane once again before making landfall. And yes, all those Disney fans out there have been worried Elsa will head to Walt Disney World – her home away from Arendelle of course!

Tropical Storm Elsa was previously listed as a Category One Hurricane (the first hurricane of the season), and downgraded to a Tropical Storm. As she picks up strength on the west coast of Florida, the National Hurricane Center is forecasting she will reach hurricane speeds once again.

As reported by OrlandoSentinel: “Tropical Storm Elsa is forecast to become a hurricane once again before it makes landfall Wednesday morning in the Tampa area, the National Hurricane Center said in its 2 p.m. update. Additionally, the National Weather Service issued a tornado watch extending from Tuesday afternoon and into the night for most of the peninsula. The tornado watch covers all of South Florida as well as Osceola County until 11 p.m. While Elsa is expected to gain strength prior to landfall, it should begin weakening Wednesday once its eye is over Florida.”

Walt Disney World resides in Orange and Osceola Counties – both of which currently have flash flood and tornado watch alerts. With Central Florida in Elsa’s path, Walt Disney World has taken extra measures to prepare for the storm, including adding Hurricane Meals Kits at select quick-service resort locations. This way guests can get their food in kit form and head back to their room to keep safe.

Here’s one reporter, Tiffany Griffith, sharing video on Twitter of Elsa when she was a Category 1 Hurricane moving through Barbados:

Keep an eye on the National Hurricane Center as Elsa continues to make up her mind on where she is headed and how strong she plans to be when she makes landfall. Stay safe, Disney family!