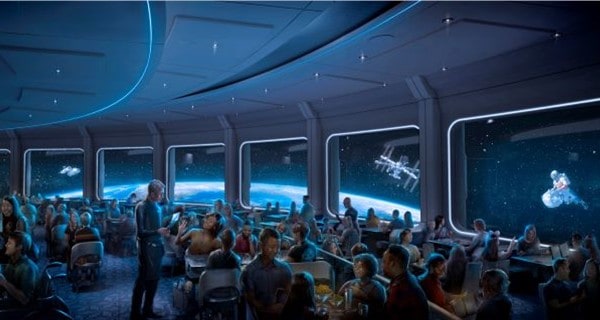 The very, very long awaited Space 220 restaurant has been of much discussion this past year. When Disney first announced the arrival of a space-themed restaurant in Epcot’s Future World, April 2019 was the target open date. Now, over a year and a half later, we are still waiting for our chance to dine in space. Well, there’s new reports that March 2021 is a possible target for opening!

Scott Gustin reported in Twitter: “I’m now hearing March 2021 as a possible goal date for Space 220… but that timeline comes with the same footnote I shared back in February.” February’s tweet: “Any rumored opening date for Space 220 should be in quotes, air quotes, italics, and sarcasm font at this point. The construction delays are a legit problem — and the reports about glass issues are true.”

What glass issues you ask? Scott Gustin previously reported in the following tweet: “there were some… issues with the large glass installed inside the restaurant. Those issues have been resolved but were part of the initial delays.”

While we wait, check out these exciting details about the restaurant as shared by Disney! “When you enter the restaurant, you’ll step into a special space elevator that will take you 220 miles above the earth’s surface and offer incredible celestial views. You’ll feel as if you’re traveling straight up into space to dock next to the Centauri Space Station suspended just beyond the orbit of Mission: SPACE. Upon arrival, you will be guided to your seats past the grow zone, a spinning wall of produce that mimics Earth’s gravity and represents some of the fresh ingredients used by the restaurant’s culinary team.”

What do you think? Will we be dining in space in March?