Everything You Need To Know About Disney's Gondola System - Disney Skyliner 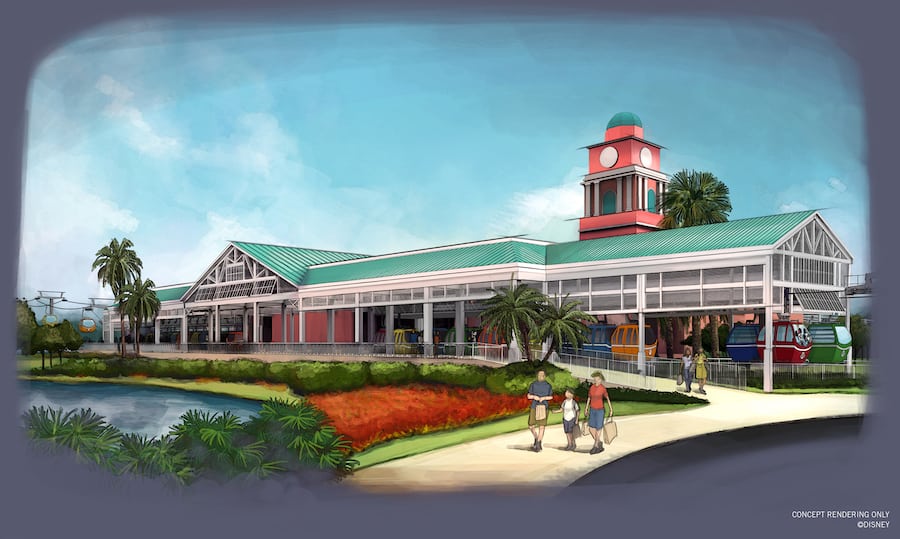 The central hub - Disney’s Caribbean Beach Resort station - will be inspired by the open-air village marketplaces of the real Caribbean (don’t expect pirates, though). Its design will also mirror that of the resort itself, and you’ll be able to admire its gorgeous waterfront setting in between your gondola trips. Naturally, most of the gondola stations will be integrated and aesthetically-attuned with their respective parks or resorts.

The Disney Skyliner station at Epcot’s International Gateway will boast a 19th century European-inspired look. Disney’s Pop Century and Disney's Art of Animation Resorts, on the other hand, will share a whimsical and colorful design, while the station’s design at Disney’s Hollywood Studios will be in line with that of the park entrance. So don’t expect your average run-of-the-mill stations, because where quality and style is concerned, at Walt Disney World Resort the sky’s the limit – literally!

You’ve probably already guessed by now that Disney Skyliner’s gondolas will offer all-new “fantastic point of view” of Walt Disney World Resort. And while it won’t connect as many locations as you’d like, you’ll still see a huge part of the resort in a new light – or as “a whole new world”. Okay, the Aladdin puns might seem a bit much, but there’s no better topic for them!

As your gondola slowly makes its way from one station to the next, you’ll enjoy a bird’s-eye view of the world below. Locations will include Hourglass Lake, Epcot’s World Showcase and towering attractions like The Twilight Zone Tower of Terror at Disney’s Hollywood Studios. When the time comes, be sure to invest in PhotoPass and Memory Maker so that you can capture as many sights as possible.

While other details are yet to emerge, it’s highly likely you can also expect in-cabin Disney music – whether original classics or newly-made, or both. Disney Skyliner might ultimately remind you of Walt Disney World Resort’s immense size, but at the same time it will bring you closer to some of the magic. In fact, you might find yourself saying that “it’s a small world, after all”!