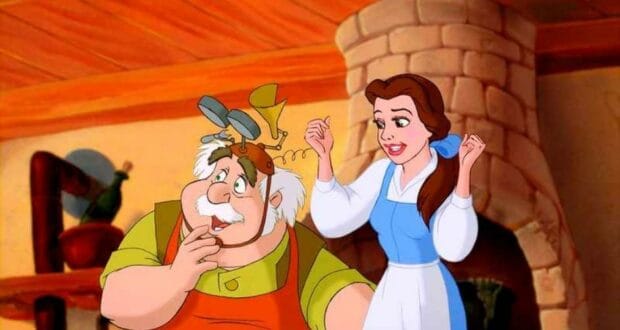 Still agonizing over what to get Dad? Take some advice from these Disney Dads for some great gift ideas!

Geppetto is the lovable carpenter who makes delightful creations, including his beloved Pinocchio. Though Pinocchio begins his life as a living puppet, he soon goes on a journey to become a real boy. Like many dads, Geppetto enjoys working with his hands, specifically in woodworking. Wood carving has become a popular creative outlet on the rise in recent years, with hobbyists posting extremely satisfying transformations on YouTube (look up “wood turning” videos and thank me later) after many began experimenting with new creative outlets that they picked up in quarantine. A great gift for dad to start experimenting with carving wood creations is a high-quality set of beautiful wood carving tools in a convenient carrying case to take anywhere and use anytime.

Mr. Darling is the father of Wendy, John, and Michael. His three children love to play in the nursery and tell stories about their beloved Peter Pan. One of their games, unfortunately, uses an article of their father’s clothing as a pirate treasure map, much to his chagrin. Naturally, he deserves a replacement. Whether or not you yourself have ruined one of your dad’s shirts as a kid, dads are always in need of a classic button-down. The white button-down, in particular, is needed in every man’s wardrobe.

King Triton is the loving and protective father of seven beautiful daughters. After the death of his beloved wife at the hands of a human ship, Triton grows to hate the humans and their world. He forbids his daughters from going to the surface, including his youngest daughter Ariel (who is the most fascinated by the human world). Over time, he learns to let go, and Ariel lives as a human. But with six daughters still at home and some noted breaches in security, Triton needs an upgrade. What better upgrade than a Smart Home security system? If your dad loves high-tech toys and smart home technology, he will love the SimpliSafe system. But more than that, he will love feeling that his home is safe.

Maurice is an inventor and loves to tinker with things. And as an inventor, he needs the best possible tools. If your dad loves to tinker with the car, under the sink, or just around the house, he also needs the right tools. Even if your own dad already has a set he uses, he has likely been using it for a long time. Any handy dad would love to have a new set of his favorite brand of tools to play with.

The Sultan of Agrabah is the father of the independent princess Jasmine. Though he is in charge of an entire kingdom, he often amuses himself with other activities and lets his Grand Vizier handle day-to-day problems (for better or worse). One of his favorite activities is playing with his miniature menagerie of various wild animals. Miniatures are a hobby for many men, often built and hand-painted to depict original characters for campaigns in games like Dungeons & Dragons or Warhammer. The easiest way to make these characters would be to get an at-home 3D printer. Many of these printers are surprisingly compact and affordable. Any tech-geek dad would love to print out miniatures and hand paint them for full customization.

Chief Powhatan is the father of his beautiful and willful daughter, Pocahontas. Pocahontas wishes to see what lies “just around the wild riverbed,” while the Chief tries to teach Pocahontas to be strong and steady like the mighty river’s calm. A perfect father-daughter activity would be the two of them joining on a journey along the river to see both sides of its nature. For an outdoor adventure-loving father, a day spent moving along a lake or river in a two-person kayak would be an excellent bonding activity. There are many different models that are safe, durable, and affordable. Certain to last a pair of a proud papa and their princess for many adventures.

Zeus is the god of Thunder, Lord of Mount Olympus, King of the Gods, and father to the mighty hero Hercules. Missing out on his son’s childhood, his only chance to be reunited with him would be to send Hercules to be trained as a hero. If you want the rippling pectorals of Hercules and his daddy, you need to start lifting. A great gift for a “dad bod” trying to get in shape is a simple set of free weights, compact enough to fit anywhere in the home and portable enough to use anytime, anywhere.

Fa Zhu is an old war hero who walks with a cane and often needs assistance when getting up or sitting down. He is the father of the brave Mulan, who loves and admires her father and goes to war to save his life. Fa Zhu spends his free time meditating and praying to the ancestors. What he could really use is some therapeutic warming massage for his old war injuries. A well-deserving dad looking out on the beautiful gardens, and the sounds of the trickling fountains, while being massaged. Every dad needs a rest off his feet now and then.

All Pacha wants is to preserve his family home on the hillside in the sun. A father of two with one on the way, he is very aware of the need to protect and provide for his family. As a reward for all his hard work, wouldn’t it be nice to hang out on his family’s hillside and fire up the grill for his family of five? Every dad’s favorite job on a summer day is to throw some burgers on the grill and serve them up nice and juicy by the pool for the wife and kids.

Mr. Incredible loves when his kids do the things that make them extraordinary. One of the things he loves the most is bonding with them over sports. For his son Dash, sports offer an arena for him to compete using his superhuman abilities, as well as an outlet for his naturally excessive energy. And one of the best games to do this with is a good old-fashioned game of father-son catch. Call out “Go long!” and toss the pig skin around for some good old-fashioned family time.

James dreams of opening up his own restaurant one day and spends a lot of time playing with recipes like his gumbo along with his daughter Tiana. If your dad has a world-famous recipe like a trademark gumbo, chili, or stew, a large high-quality stainless steel stew pot is the perfect way to say, “More please!” on Father’s Day.

The perfect addition to a man-cave is this faux bear skin rug. Just like the large and lovable King Fergus, your dad can imagine he is the king of the castle, regaling tales of the mighty bear he hunted down while drinking ale with his friends.