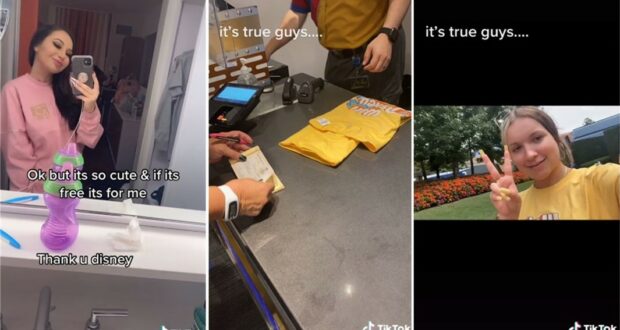 Yes, this is happening! If you’re on TikTok, chances are you’ve seen the “Free Shirt Hack” going viral. Two guests have recently dressed inappropriately at Walt Disney World parks and have been provided free shirts from Disney to so they adhere to the guest dress code.

According to the Walt Disney World website, Disney’s dress code states: “Inappropriate Attire: Disney reserves the right to deny admission to or remove any person wearing attire that is considered inappropriate or attire that could detract from the experience of other Guests. Attire that is not appropriate for the parks—and which may result in refusal of admittance.” The dress code goes on to state specifically: “Clothing which, by nature, exposes excessive portions of the skin that may be viewed as inappropriate for a family environment.”

But, it looks like instead of being denied admission, these two Disney goers received free Disney shirts. First up, Amanda @amandaaadimeo shared a video via TikTok that went viral back in May. She wore a top that showed too much at Magic Kingdom and Disney gave her a $75 spirit jersey for free so she could be in adherence with the dress code:

While we first thought, ok, this is just a one time thing… another TikToker posted this month that “it’s true guys…” She too received a free shirt while at EPCOT for dressing inappropriately. Here’s the video from Alyssa @alyssaschueller:

What are your thoughts? Do you think this viral “Free Shirt Hack” will go away on its own, or will Disney need to start denying admission like their dress code states?