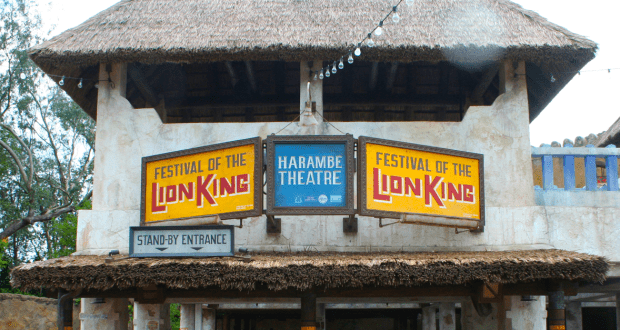 Have You Been Missing These 3 Spectacular Shows At Animal Kingdom Park?

Disney’s Animal Kingdom is full of amazing animals, thrilling rides and also spectacular shows! Read below about 3 shows you may be missing at Animal Kingdom.

3. Festival of the Lion King: The Festival of the Lion King is located in Africa at Disney’s Animal Kingdom. This 30-minute show is a spectacle of singing, larger than life characters, dancers and even acrobatics. This air-conditioned stadium seating theater allows you and your whole family to be immersed in acts from the Lion King film. The costuming for this festival is breathtaking. The acrobatics are impressive as well, especially the monkeys! Simba, Timon, Pumba and more make appearances throughout the show. The Festival of the Lion King is a 30-minute show that brings your right into the pride lands. The main characters also interact with the crowd and singing along with your favorite characters and songs are encouraged! Make sure you take the time to enjoy this spectacular show next time you are at Animal Kingdom. Fast passes are available and there are multiple show times throughout the day, as well.

2. Finding Nemo the Musical: One of the other unique live shows you may be missing at Animal Kingdom is Finding Nemo: The Musical. This 40-minute show uses elaborate puppeteers, larger than life sea creature puppets of our favorite undersea friends and original songs to help bring one of our favorite stories to life! This spectacular show takes you in the big blue ocean and features your favorite characters like Nemo, Bruce, Crush, Dory, and even Nigel the pelican. Did you know the Crush puppet is a large as a car? The musical introduces young and old to wonderful music, including the hit “In The Big Blue World”. This is a show that can only been seen at Animal Kingdom, we would strongly recommend a Fast Pass or getting in line early for this popular show.

1. Flights of Wonder: Flights of Wonder is a spectacular show that happens every day, several times a day in Asia at Disney’s Animal Kingdom. This 25-minute show showcases some of the beautiful birds that call Animal Kingdom home. The show takes place under a canvas canopy that is shaded and cool. The stage resembles Asian ruins and sets the theme of a mystical show of exotic birds. The host of the show is a bird trainer who is informative and funny. Some of the bird species you will see during the show include Blue Macaws, Hornbills, Grey Parrots, Great Horned Owls, East African Crowned Crane and more! If the trainer asks for a helper make sure you raise your hand, you may get the encounter and photograph of a lifetime! There are Fast Passes available for this show if you like to plan ahead.

These are just 3 spectacular shows offered at Disney’s Animal Kingdom. Make sure to check these out next time you visit and have a wild time!