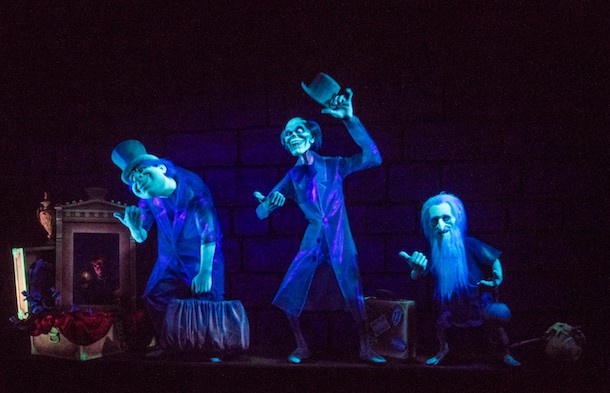 Along with hiding Easter eggs and references in their works, Disney is also known for recycling certain elements and sequences in their materials. This can be seen in films like The Aristocats, The Jungle Book, and Robin Hood; but it can also be seen in The Haunted Mansion. The graveyard is home to several “pop up” ghosts, ghost heads on springs that pop up from behind gravestones for a brief scare. They are all rather ugly and somewhat comical, but one of these ghosts appears twice, but not in the same scene. Though I cannot tell you precisely where this pop-up ghost resides, I do know he is in the vicinity of the tea-drinking mummy. If you look at him closely, he bares a shocking resemblance to Ezra, one of the three Hitchhiking Ghosts. The two are practically identical in regards to facial features, design, and expression. Perhaps the Imagineers had one extra Ezra head lying about and didn’t want to throw it away, or perhaps it was just a cleverly designed collection of spare parts, you be the judge. Either way, mark this one up as another one of those interesting tidbits you never noticed before.