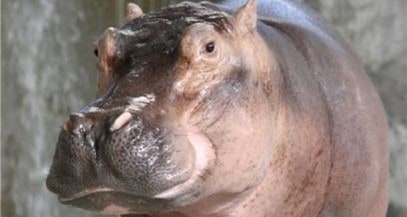 Back in February 2018, a baby boy hippo was born at Disney’s Animal Kingdom. Disney Cast Members named the sweet boy Augustus or “Gus” for short. Now, we’re learning Gus has joined a new family at the Dallas Zoo to help with the Association of Zoos and Aquariums’ Species Survival Plan.

“HUGE HIPPO NEWS: There’s a new man in town! Augustus (“Gus” for short), joins our bloat (yes, that’s the term for a group of hippos!) from Disney’s Animal Kingdom Theme Park on a breeding recommendation from The Association of Zoos and Aquariums’ Species Survival Plan — he’s been matched with both of our girls, Boipelo and Adanna. At 3 years old, Gus is still a growing boy. In fact, he’s gained 44 kg (almost 100 pounds) since he arrived just over one month ago! This means it will be a few years before he’s ready to become a dad, but we’re thrilled to be able to continue growing the hippo population in AZA zoos as a safeguard against extinction. He recently cleared his 30-day quarantine and is still getting settled in his new space, so it may be a while before you get to meet him in person (you know we’ll keep you updated!). Our zoologists say that Gus is a sweet, shy hippo. His favorite foods are coastal hay and watermelon, and he enjoys interacting with his enrichment items, particularly his giant tipsy tom. Welcome, Gus!”

Take a look back to February 2018 when Disney announced the arrival of Gus:

We’ll miss Gus at Disney’s Animal Kingdom, but so happy he found a new home to help with the Association of Zoos and Aquariums’ Species Survival Plan!