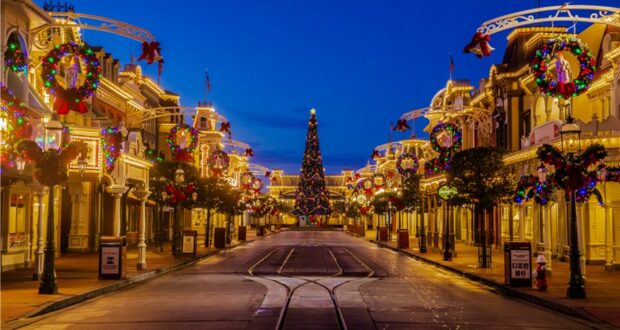 Today, November 6, is the big day! The holidays have officially arrived at Magic Kingdom, Disney’s Hollywood Studios, and Disney’s Animal Kingdom! Disney has released information for what to expect beginning today and throughout the holiday season at Magic Kingdom as shared by DisneyParksBlog below.

Your favorite characters don their holiday best and celebrate the season in a series of special cavalcades, complete with Christmastime floats and music. From Mickey and friends trimming a tree to Goofy and his pals whipping up a bakeshop full of scrumptious treats, character cavalcades bring holiday spirit to the streets of Magic Kingdom throughout the day. And keep your eyes open for Santa when he glides down the parade route in his sleigh.

Main Street, U.S.A. is the spot to catch the Holiday Trolley, bringing festive harmonies from the Dapper Dans barbershop quartet, and you may just see some Toy Soldiers joining the Main Street Philharmonic when they march through Magic Kingdom playing their merry melodies.

At night, holiday magic brings a festive look to Cinderella Castle with special projection effects, producing a kaleidoscope of designs including festive stripes and dots, a whimsical Christmas sweater look, a jeweled winter castle and a regal overlay of red, green and gold ornamentation. It’s sure to provide the perfect colorful backdrop for your holiday photos.

Anyone else planning a holiday visit to Magic Kingdom this holiday season?