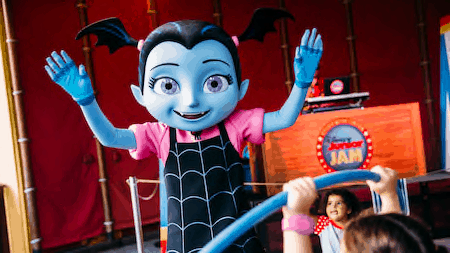 2. Halloween Soiree - With the 25th Anniversary of The Nightmare Before Christmas, it makes perfect sense to throw a big bash on Halloween Night.

3. Vampirina Greeting - Just in time for the spookiest season, Disney Jr.’s favorite purple vampire has joined the lineup at the Hollywood and Vine character meal experience.

4. Cookie Challenge - Super pumped about this one! Though few details have yet to be released for the upcoming holiday season, credible sources are saying there will be a new Cookie Challenge available as part of Epcot’s Festival of the Holidays.

5. Lightning McQueen’s Racing Academy - Guys! This is big news! Why are we not all talking about this? In early 2019, Lightning McQueen is scheduled to return to Hollywood Studios in a brand-new show experience and character greeting!

6. Lion King Anniversary - The 25th Anniversary of the Lion King animated movie requires celebration, and where better to do it than Disney’s Animal Kingdom Park!

7. Pixar Characters - Hollywood Studios just keeps getting better and better! Although we’ll still need to wait about another year for Star Wars: Galaxy’s Edge to open, new character experiences along what used to be Pixar Place will be a welcome addition in the meantime.

8. MousekeDance Party - If you’ve experienced the Move It! Shake It! Dance & Play It! Street Party at Magic Kingdom, you know how fun it is to sing along and dance in the streets with favorite characters.

Left 4 of 4 right
Next: 20 New Experiences We Love At Disney World Resort