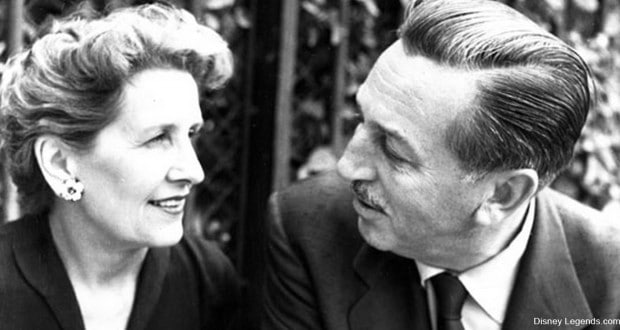 Lillian and Walt Disney shared over 40 years of romance and worked together diligently to create the special magic that we have all come to appreciate from Disney films and parks. Her creativity and love for her family are examples to us all of how much influence one woman can have. Below are 11 remarkable facts about Lillian’s life and her amazing contributions to her family, Disney and us all!

1. Lillian Marie Disney, wife of Walt Disney for over 40 years, was born on February 15, 1899. She grew up on the Nez Perce Indian Reservation where her father worked as a blacksmith and federal marshall.

2. She met Walt at Disney Studios where she worked as a secretary in “ink and paint”. Lillian was quite stylish, slim and had short brown hair. She took deep pride that Walt, who volunteered to carpool other coworkers home, would take everyone else home first and save Lillian until last even though her stop was the closest.

3. They were married in 1925 in Idaho at Lewiston’s Episcopal Church of the Nativity. Regrettably, Walt’s parents could not attend. Lillian’s father was deceased and her uncle gave the bride away. She wore a dress which she had made herself and her cousin recounted that Lillian giggled nervously throughout the service.

4. Lillian is credited with the naming of Walt’s cartoon mouse, originally dubbed “Mortimer Mouse” when she was shown a drawing of the little fellow. Consequently, she suggested “Mickey Mouse” because she was concerned “Mortimer” sounded too pompous.

6. One of the Disneyland Railroad cars, the “Lilly Belle”, was named after her, and the locomotive in Walt Disney World bears the same name. In May 1977, Lillian christened another namesake “The Empress Lilly” a paddle steamer replica in Florida’s Downtown Disney.

7. In 2003 Lillian Disney was inducted into the “Disney Legends” program which recognizes people who have made an extraordinary and integral contribution to The Walt Disney Company.

8. Walt Disney died in 1966 leaving ½ of his wealth to his family and the other ½ to a charitable foundation for the arts.

10. Reflecting on her life with Walt Disney, Lillian said, “We shared a wonderful, exciting life, and we loved every minute of it. He was a wonderful husband to me, and a wonderful and joyful father and grandfather.”

11. Exactly 31 years after Walt’s death, she suffered a stroke and Lillian Disney died the next morning, December 16, 1997 at her home at age 98. She was just 2 months shy of her 99th birthday. She was laid to rest next to Walt in Glendale, CA.

The next time I visit Disney World, I’m going to take a few moments to remember the couple who dared to dream such wonderful movies, characters, and theme parks into being. Thanks Mr. and Mrs. Disney for inspiring us all to imagine and believe. Our world is a better place because of you and much more magical than it ever was before!

Disney History Lillian Disney 2014-08-09
Becky
Previous: Which Disney Princess ‘Bad Girl’ Are You Most Like?
Next: SURPRISE! We’re Going to Disney World! BEST REACTION EVER!