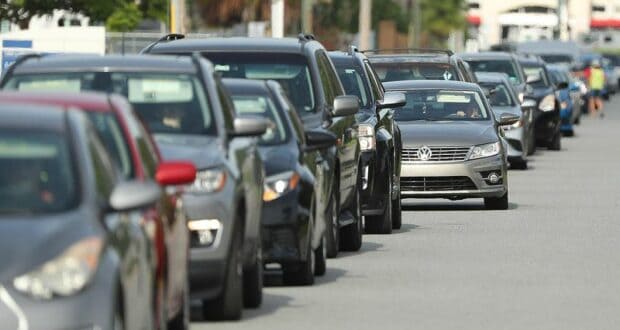 Orlando is known as the “tourism capital of the world”. While COVID-19 numbers are showing a decline in the state, the pandemic has without a doubt rocked the tourism industry as the usual crowds simply aren’t flocking to the area as they were before. A local food bank with a 2-mile long line is a sign of the times.

As shared by the OrlandoSentinel: At 4 a.m., the first furloughed workers arrive to stake out their spots for free groceries. They wait for 4 1/2 hours in their cars. If they show up late, the food might run out. By the 9 a.m., the nearly bumper-to-bumper row of cars stretches 2 miles, clogging up one lane of Orange Blossom Trail and heading down Landstreet Road.

In the line are hundreds of people: Furloughed Disney World employees, welders who saw business shrivel up, hotel workers unceremoniously laid off in mass numbers, and others.

Every week for the past four months, volunteers have handed out free boxes of groceries at the drive-thru food bank organized by Unite Here 737, a local union that represents primarily Disney hotel housekeepers and food service workers.

“Every week it gets worse,” said Nick Canturano, a furloughed server at a Hollywood Studios buffet restaurant, who volunteers every week at the outdoor food bank located at a union hall about a mile from the Florida Mall.

The $600 federal unemployment benefit Floridians had been collecting each week vanished July 31, so now the state’s benefit — one of the lowest in the country — only pay a maximum of $275 a week.

The reopening of Disney World, SeaWorld and Universal Orlando theme parks have not fixed Orlando’s economy which recorded a 15.3% unemployment rate in July — the highest in the state.