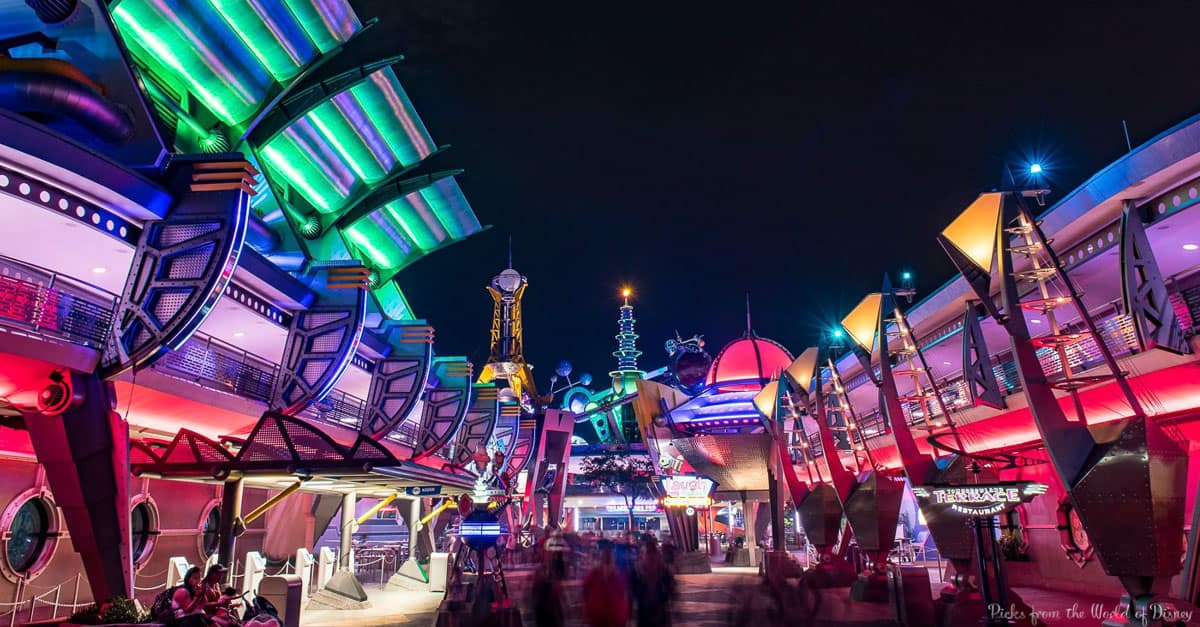 Tomorrowland was originally designed to portray Walt Disney’s view of the future.  On opening day, however, only two attractions were opened: “Grand Prix Raceway” and “Skyway to Fantasyland”.  Three other attractions were added shortly after the opening date: “Flight to the Moon” a simulated flight to the moon, (soon replaced by the updated “Mission to Mars”), “America the Beautiful”, a 360 degree circle vision movie, and “20,000 Leagues Under the Sea” submarine ride.

Now, just in time for the Golden 50th Anniversary, Tomorrowland will be getting another face lift with a brand new attraction, “TRON Lightcycle Power Run Motorcycle”, an indoor coaster-style ride that allows riders to board a train of two-wheeled Lightcycles for a thrilling race through the digital frontier.  The attraction will be located next door to “Space Mountain”,an indoor dark thrilling roller coaster ride. This will most likely become the most visited area of Tomorrowland.

From April, 2010 until May, 2014 Fantasyland underwent the largest expansion of Walt Disney World in its 41-year history, doubling in size from 10-21 acres.  A few rides and attractions were permanently closed and new rides and attractions were added.  A whole new area, “Storybook Circus” debuted on March 12, 2012 with twin “Dumbo the Flying Elephant” side by side carousels with colorful new water and lighting features, connected by an indoor queque that doubles as a playground.  Another attraction is a family-friendly roller coaster, “The Great Goofini’s Barnstormer”, plus a large Circus Tent housing Dumbo’s Circus souvenirs, sweet treats, apparel, hats, Mickey ears, etc.  Stop by for a special “Meet and Greet” with Mickey, Minnie, Donald Duck, Daisy, and other Disney characters.  There is also a splash and play area where young and old can cool off on those hot summer days.

The “New Fantasyland” had its grand opening on December 6, 2012, with new rides and attractions.  On May 28, 2014 the newest attraction, “Seven Dwarfs Mine Train”, a thrilling family-friendly roller coaster opened and became the last attraction completed in the Fantasyland expansion.  Other new attractions were “Under the Sea-Journey of the Little Mermaid”,“Enchanted Tales With Belle”, “The Many Adventures of Winnie the Pooh”, and, of course, “Dumbo’s Storybook Circus”. The newest restaurant included in this expansion was “Be Our Guest” restaurant, set in the beautifully recreated “Beast’s Castle”, where you can enjoy a quick service breakfast, lunch, or sit-down dinner.

Liberty Square located near the Rivers of America is a nostalgic recreation of a colonial village in the Revolutionary era of America.  The buildings and cobblestone streets are reminiscent of a time in American history when the thirteen original colonies were beginning to expand.  The architecture captures the spirit and look of that historical period. There are three major attractions to visit here.  The first and very popular is the “Haunted Mansion” where guests take a ride in a “doom buggy” for a ride into the inner sanctum of an old abandoned 18th century mansion.  During their tour, they will encounter 999 ghosts and spirits accompanied by eerie sights and sounds of ghoulish screams, moving furniture, and a trip through a very scary graveyard.  After your visit with the ghosts and spirits, take a ride on the “Liberty Belle” , a paddlewheel steam-powered riverboat which takes guests on a cruise around the Rivers of America.  Another attraction is the “Hall of Presidents” set in a beautifully designed colonial-style mansion, which houses a grand theater where 45 audio-animatronic figures representing all the US Presidents come to life.