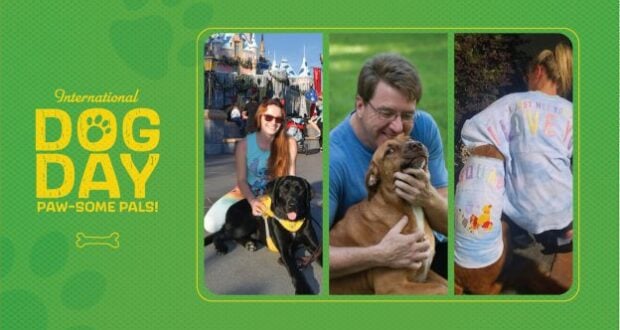 Just like Mickey Mouse and Pluto are a dynamic duo, so are Disney cast members and their four-legged friends! In celebration of International Dog Day, DisneyParksBlog is sharing photos of their cast members and canine companions.

Megan Haug, Digital Producer and Linux: “Linux is a very special puppy with a purpose –– he’s currently training to be a Guide Dog for someone who is visually impaired. I am a puppy raiser through Guide Dogs of America, which means that I have been working with Linux since he was eight weeks old. Taking Linux to Disneyland was an incredible experience; it’s a great opportunity to see all of the work we’ve been doing pay off. He’s been training very hard over the past year and is the happiest dog I’ve ever met. One day Linux will change someone’s life and raising Linus has forever changed mine.”

Chelsea Auburn, Senior Associate, Alliance Management and Luna: “Our sweet Luna loves showing off her Disney side with her countless accessories! She has a lot but her favorites are probably her princess leash, Minnie harness and rose gold ears to match mine. I’m a sucker for anything Disney-themed for Luna (and myself!) so when I saw they were coming out with matching spirit jerseys, I knew I had to get them for us.”

David Romero, Software Developer, and Jasmine: “Jasmine is a seven-year-old Golden Retriever, and she is an amazing service dog as well! Jasmine is a post-traumatic stress disorder (PTSD) dog, which means that she was trained to detect a pheromone that my body produces when I am in distress. She’s a really big Disney fan as well. She has also posed for pics with just about every character, although she is not a fan of Marie…”

Katie Erickson, Director, Costuming, Walt Disney World and Disney Cruise Line and Murphy: “Murphy is my diabetic alert dog; he’s an amazing creature that loves and protects me. Prior to working with Murphy, I never told anyone I had Type 1 Diabetes, but because of his vest, Guests and fellow Cast Members alike share their Diabetes stories with me now and I’ve found a new voice as an advocate both at Disney and in the community. When his vest is on, Murphy is all business, but when his vest is off, he loves to snuggle, prefers to be carried on my hip like a toddler and will chase and fetch balls for hours. He also loves to go boating and to the beach!”

Frank Reifsnyder, Sr. Manager, Global Publicity, Disney Parks Experiences and Products and Loki: “Our 1-year-old Chorgi (half Chihuahua, half Corgi) is a huge Disney fan. He was named after Loki, and loves Mickey, Marvel and Star Wars. He loves to dress up as and play with Spider-Man and has even met Mickey at a Cast Member Halloween event last year (where Loki is dressed as a hot dog and we went as condiments).”

Tember Bower, Leader, Disney Reservations Center and Luke: “Shortly after my husband and I got married, we started our search for a puppy. Then Luke found us. His owner had found him caught in a fence and couldn’t afford the surgery he would need to survive, so they decided to put him down. The vet fell in love with his sweet personality and decided to do the surgery anyway, with the hopes that she could find him a loving home. After hearing his story, we decided to go meet him to see if he would be a right fit for us. When he hobbled over on his three legs to meet me and laid his head in my lap, I knew he was meant to be my boy. He is now five years old and he doesn’t even know that he’s missing a back leg. He runs and plays like any four-legged dog, and our family wouldn’t be complete without him!”

Shawn Becker, Disney Vacation Club Regulatory Affairs Specialist, Nani and Nala: “I was just about to make the move to Orlando to start my second [Disney] College Program and thought a few extra friends for the journey might make the move easier. Little did I know how much this mother-daughter duo would end up meaning to me and helping me over the years and my career with the company. From the highs to the lows, to the attempts of dressing them up for Halloween, from working in the Parks, then Disney Vacation Club and now remotely in my home office, my girlies have been here for it all and I honestly don’t think I could have done any of this without them! I love them more than I could ever truly tell them and it raises that age old question of ‘Who rescued who?’”

Our Disney Ambassadors are joining in the #InternationalDogDay fun too, with photos from past park visits! Don’t forget to share your favorite pup photos using #DisneyMagicMoments.