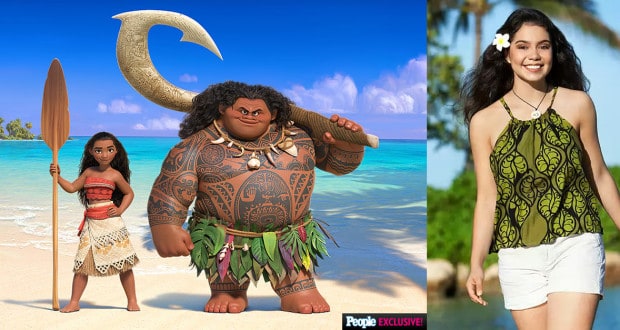 You’ll love this article from People Magazine, about the newest Disney Princess, Moana, and the young lady lending her voice to the character!

But when Disney Animation began searching for a girl to voice the lead in its next princess movie Moana– about a young teen from 2,000 years ago who sets sail to fulfill her ancestors’ quest – Cravalho didn’t think she was good enough to audition.

“I was getting through my freshman year, and there were already so many great submissions over YouTube,” the 14-year-old Native Hawaiian tells PEOPLE, which features an exclusive first look at the movie in this week’s issue.

Good thing a fairy godmother (a.k.a. an Oahu casting agent) was looking out for Cravalho. After the agent discovered the teen’s singing talents during a charity competition, Cravalho was whisked off to Los Angeles, where directors Ron Clements and John Musker (The Little Mermaid, Aladdin cast her opposite Dwayne Johnson in the animated film, set for release on Nov. 23, 2016.

“Moana is such an amazing character,” says Cravalho, who lives in the town of Mililani with her mother, Puanani. “She’s brave, she is so empowered, she knows what she wants and she’s not afraid to get it, and I think that’s something that I can relate to as well. I just love watching how she goes along in this wonderful movie and grows as a person and helps her culture along the way.”

Cravalho is especially excited to work alongside Johnson, who will play a demigod named Maui whom Moana encounters during her travels.

“I am very excited about that, my gosh,” says Cravalho, a soprano who participates in her school’s glee club. “I’ve never heard him sing before so it’s going to be really interesting!”

Thanks to People Magazine for an introduction to this delightful Disney Princess! Check out this sneak peek video of Moana below:

Moana Movies 2015-10-08
Becky
Previous: Disney After Dark – 10 Things You Must Do Around Walt Disney World Resort at Night
Next: 15 Rigorous Requirements to Being a Cast Member at WDW