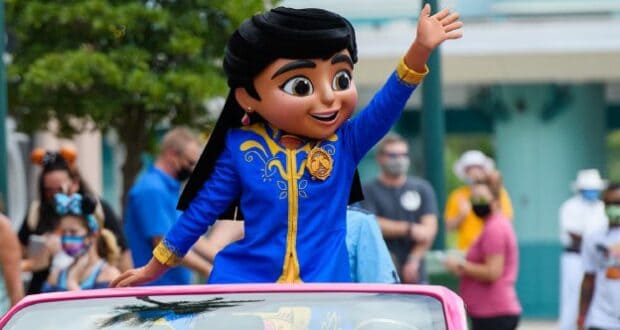 If you have a child that watches Disney Junior, chances are you know all about “Mira, the Royal Detective”. In the Disney Junior animated series, the young Mira gets appointed by the queen to become the Royal Detective, solving adventurous mysteries along the way. As previously shared, Mira joined the Disney’s Hollywood Studios Cavalcade with her surprise appearance on October 10. Disney is sharing Mira’s experience as she visited each park at Walt Disney World seeking out her friends, Mikku and Chikku. Check out the details and cute video as shared below by DisneyParksBlog.

Mira, star of the hit Disney Junior series “Mira, Royal Detective,” recently paid a visit to Walt Disney World Resort, on a special case to track down her missing mongoose friends, Mikku and Chikku. Her adventure, which took her through all four of the Disney theme parks, was being filmed for a special Disney Junior video celebrating Diwali, the holiday festival of lights in India. Have a look!

Mira’s special appearance at Walt Disney World Resort was for just one day, but you can spend time with other Disney Junior friends every day at Disney’s Hollywood Studios. Disney Junior fans are invited to join the fun at “Disney Junior Play & Dance!” in the Animation Courtyard. Each party performance throughout the day features a dynamic DJ spinning favorite songs from Disney Junior TV shows, plus special onstage appearances by Disney Junior stars, including Roadster Racer Mickey. And returning after the holiday season, Disney Junior Stars Motorcade brings favorites like Doc McStuffins, Fancy Nancy and Vampirina to the park’s Hollywood Boulevard.

Disney Junior’s “Mira, Royal Detective” is an animated mystery-adventure series for preschoolers, inspired by the cultures and customs of India. Set in the fictional land of Jalpur, the series follows the brave and resourceful Mira, a commoner who is appointed to the role of royal detective by the Queen. Along with her friend and talented inventor Prince Neel, creative cousin Priya and comical mongoose sidekicks Mikku and Chikku, Mira will stop at nothing to solve a case. Each episode features two 11-minute music- and dance-filled stories which showcase Mira utilizing critical thinking and deductive reasoning to help her family, friends and extended community.

You can catch “Mira, Royal Detective” every day on Disney Junior and in the DisneyNOW app.