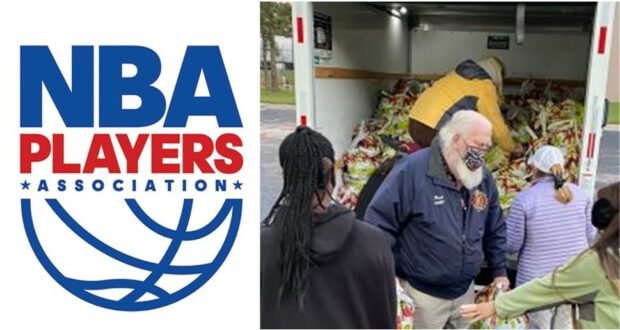 While Walt Disney World is steadily recalling Disney Cast Members as Disney fans return to the parks and resorts, there are still many Cast Members out of work and struggling to get by. It’s exciting news to hear NBA Players Union stepped up and donated $50,000 to a Disney Cast Member food bank!

“The National Basketball Players Association (NBPA), the union of professional basketball players in the National Basketball Association (NBA) is contributing $50,000 to the food bank for laid-off Disney World hotel and restaurant workers run by UNITE HERE Local 737.The COVID-19 crisis devastated Orlando’s tourism industry and left hundreds of thousands of workers jobless. Local 737, representing 18,000 Disney employees in the resort’s housekeeping and food and beverage departments, has run a weekly food distribution for affected workers and their families for 33 consecutive weeks. The NBPA’s members interacted with Local 737’s housekeepers, food servers and other Disney workers inside the “bubble” during the players’ stay at several Disney World resorts during the recent NBA season.

“Our hope with this donation is to say ‘thank you’ and extend the same kindness to the Members of Local 737 that they extended to our Members this past summer and fall,” said Michele Roberts, executive director of the NBPA. “This has been a tough year – especially for these folks and their families. We stand with our Brothers and Sisters and wish them all the best during this holiday season. “In early December 2020, Local 737 announced that it was running out of funds to continue the food bank into 2021.

“This amazing contribution from the players’ union could not have come at a better time,” said Jeremy Haicken, president of Local 737. “With thousands of workers still out of work and receiving Florida’s meager unemployment benefits, there is a massive need to provide food to workers’ families. We are deeply grateful to the NBA players and their union for this generous donation.”

With a weekly food cost of over $10,000, Local 737 is continuing fundraising efforts. Contributions for the food bank can be made online to the UNITE HERE Education and Support Fund here.