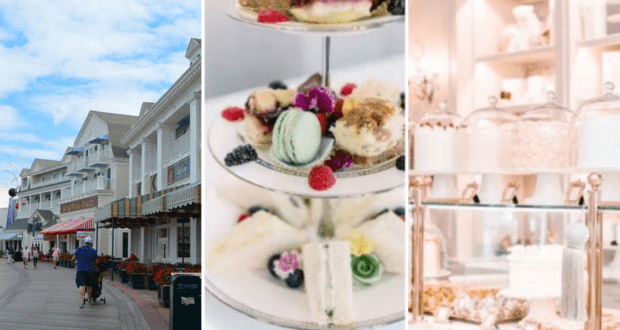 Reimagined dining experiences are coming to the BoardWalk Inn at the Walt Disney World Resort! In addition to redesigned Guest rooms, a new restaurant, coffee bar, and updated take on the resort’s lobby will be arriving at the resort by the end of 2023.

The Disney Parks Blog just announced a new table service restaurant and bakery coming to the waterfront district at the BoardWalk later this year called The Cake Bake Shop by Gwendolyn Rogers. On the menu, Guests will find an array of sweet and savory items along with a new afternoon tea service to complement the classic turn-of-the-century theming of Disney’s BoardWalk.

Inside Disney’s BoardWalk Inn, the lobby will be refreshed with new details. Off the lobby, renovations will include a new coffee bar serving small bites and artisanal beverages. Access to the new coffee bar will include seating areas both inside the resort and outdoors and items will also be available to go.

To make way for the new dining experiences coming to Disney’s BoardWalk Inn, ESPN Club and the Bellevue Lounge will close. For an alternative sports bar at the Walt Disney World Resort, you may want to plan a trip to Rix at Disney’s Coronado Springs Resort.

Disney’s BoardWalk Inn is located right on the shores of Crescent Lake in the EPCOT Resort Area, in walking distance or a short boat ride away from both EPCOT and Disney’s Hollywood Studios as well as the Walt Disney World Swan and Dolphin Resort and Disney’s Yacht and Beach Club Resort.