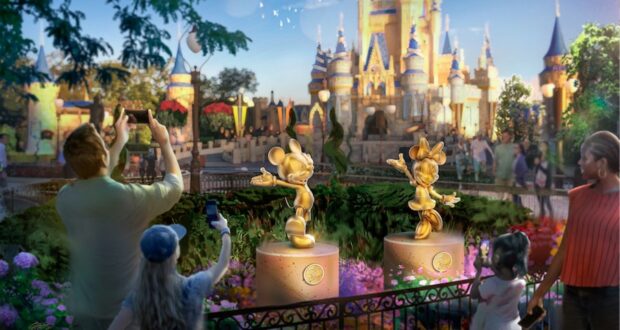 It’s been a day FULL of news surrounding Walt Disney World’s 50th Anniversary, “The World’s Most Magical Celebration”. As we take in all the exciting details including Magic Kingdom’s new nighttime spectacular, EPCOT’s debut of Harmonious, new daytime entertainment at Disney’s Animal Kingdom, new “Mickey’s Celebration Cavalcade”, and more – we’re thrilled to hear we will have a chance to check out new golden character sculptures that will be coming to Disney World theme parks!

As shared by Disney: “These eight friends (Mickey Mouse, Minnie Mouse, Donald Duck, Daisy Duck, Goofy, Pluto, and Chip ‘n’ Dale) will also be featured in special golden character sculptures debuting Oct. 1 at Magic Kingdom Park; in this artist rendering, you can see Mickey and Minnie shining in the sunlight near Cinderella Castle. There will be 50 characters total in this series of sculptures that will be displayed across all four theme parks. We’ll soon reveal more of the “Disney Fab 50” as excitement builds for the big day, as well as the surprising ways you’ll be able to interact with these beautiful sculptures as part of the 50th anniversary celebration.

Of course, our minds go into scavenger hunt mode! We’re hoping Disney will have some sort of passport or something to check off finding each of the “Disney Fab 50”. Or just maybe (this is us just dreaming!), Disney will make the statues interactive in one way or another so when you scan or take a picture of one they come to life on your phone. The art rendering does show children holding phones, so you just never know. We’ll keep you posted as we learn more about these new statues and the “Disney Fab 50”!