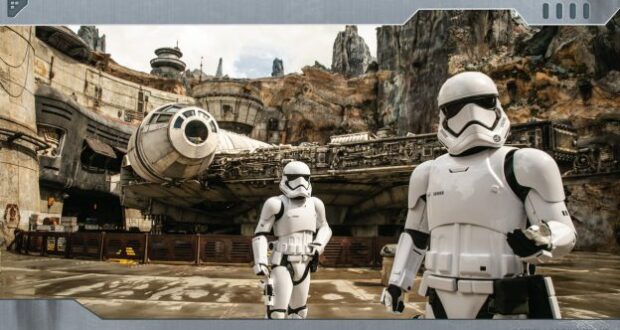 It’s hard to believe it’s been a full year since we first got the chance to live our very own Star Wars adventures in Star Wars: Galaxy’s Edge at Disney’s Hollywood Studios. We’ve explored the planet of Batuu, we’ve tasted galactic delicacies, shopped in Black Spire Outpost, built our custom lightsabers, and even found ourselves in the middle of an epic battle on Star Wars: Rise of the Resistance. Now, DisneyParksBlog has a variety of new ways to bring the excitement of Star Wars: Galaxy’s Edge into our own homes.

A few weeks ago we announced the Star Wars: Galaxy’s Edge: Trading Post, accessible only at Target, are on store shelves now!

Earlier this week, D23 Inside Disney, the official Disney podcast, sat down with Walt Disney Imagineering’s Scott Trowbridge, Creative Portfolio Executive for Star Wars: Galaxy’s Edge, and he shared some exciting announcements about brand new ways we are expanding the Star Wars: Galaxy’s Edge experience for our guests. Listen in.

For video game fans, earlier this week EA and Lucasfilm announced a brand-new adventure to the edge of the galaxy with “The Sims 4 Star Wars: Journey to Batuu.” This game pack is coming to PC, Xbox One and PlayStation®4 systems on Sept. 8, offering players the ability to “play with life” and create their own, unique Star Wars adventure. Inspired by Star Wars: Galaxy’s Edge, the Sims will experience the authentic sights and sounds of Batuu, including the Millennium Falcon and DJ R-3X’s interstellar hits at Oga’s Cantina. They’ll also embark on exciting missions, unite with iconic characters like Rey and Kylo Ren, and get their hands on their very own lightsaber and droid.

Launching later this year is another experience of a completely different type: “Star Wars: Tales from the Galaxy’s Edge” will come to life in stunning virtual reality. ILMxLAB, Lucasfilm’s award-winning immersive entertainment studio, is developing the new action-adventure virtual reality experience exclusively for Oculus Quest. You play a droid repair technician who crash lands on Batuu after a pirate attack and, in typical Star Wars fashion, you’ll quickly get swept up into a grand adventure. Taking place on the outskirts of Black Spire Outpost and expanding into the wilds of Batuu, the experience matches the look and feel of Star Wars: Galaxy’s Edge.

If you’re looking for something to stream on Disney+, we’ve got you covered there, too! Recently added to the service is the “Star Wars: Galaxy’s Edge: Adventure Awaits” television special featuring Neil Patrick Harris, Kaley Cuoco and others exploring the land for the first time and living out their own Star Wars adventures.

So, however you choose to live your own Star Wars adventure, inspired by your favorite memories at Star Wars: Galaxy’s Edge, you now have more ways than ever… in the park and at home!